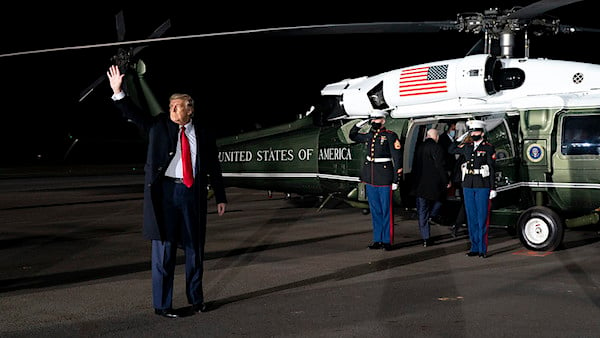 President Donald J. Trump waves as he prepares to board Marine One at Dalton Municipal Airport in Dalton, Georgia, Tuesday, Jan. 4, 2021, after addressing a rally at the airport. (Official White House photo by Tia Dufour)

Fleischer is a GOP strategist and was a White House press secretary under former President George W. Bush, according to the AP. Fleischer also voted for Trump.

Rioters descended on the Capitol building during Wednesday’s march, protesting against the Electoral College’s certification of the presidential election results, multiple sources said. Members of the mob broke into House Speaker Nancy Pelosi’s office after getting past Capitol Police and breaking into the Capitol.

The former White House press secretary had suggested Wednesday, just before a mob stormed the Capitol, that 2016 protests against the president cleared the way for Wednesday’s protests. Fleischer tweeted that he made those comments before rioters stormed the Capitol and urged Trump to denounce “and tell the crowd to disperse.”

“No group, for any reason, should be allowed to take over the Capitol Building. It belongs to the people, not the mob,” Fleischer tweeted Wednesday.

Ari Fleischer says Trump “on his own” after Capitol riot: “I won’t defend him anymore” https://t.co/rHC99fHJ7a pic.twitter.com/La42JbPxts

Pelosi echoed Senate Minority Leader Chuck Schumer call for Vice President Mike Pence to remove Trump from office through the 25th Amendment during a news conference this week, according to NPR. Pelosi also said “the Congress may be prepared to move forward with impeachment” should Pence and the Cabinet not remove Trump from office.

Fleischer wrote in October that he was voting for the president due to the choice of either “a personally offensive outsider who signs good policies and a professionally offensive politician who will turn bad ideas into law,” according to an op-ed for The Hill.

Ari Fleischer Communications did not immediately respond to the Daily Caller News Foundation’s request for comment.

WND News Services
These reports are produced by another news agency, and the editors of WND believe you'll find it of interest.
IRS to demand face scans from taxpayers
Seattle area faces 'crisis' after firing unvaccinated correctional employees
Before recent wave of train cargo thefts, Union Pacific laid off many of its railroad police force
World Economic Forum hears call for global wealth redistribution
Not 1 corpse has been found in 'mass grave' of indigenous children in Canada
See more...