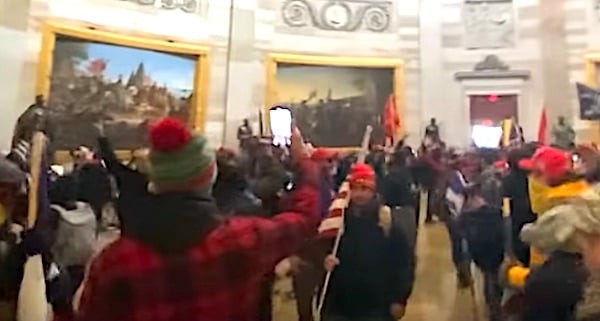 An FBI agent in Washington has submitted an affidavit in a criminal case against several people who allegedly were involved in the riot at the U.S. Capitol on Jan. 6.

It undermines House Speaker Nancy Pelosi's claim that President Trump's speech to supporters that day was an "incitement of insurrection."

But an affidavit filed by FBI agent Michael Palian Jr., in a case against Thomas Edward Caldwell, Donovan Ray Crowl and Jessica Marie Watkins, makes clear the violence was the result of preplanning rather than day-of-the-riot "incitement."

"Trump did not encourage any of the activity that happened," he said. "This exonerates Trump. Amazing."

The evidence is significant because Democrats are insisting on a Senate trial, even though the penalty of conviction is removal from office.

Even left-leaning constitutional scholars contend that Trump's comments are protected by the First Amendment.

The Washington Post acknowledged that "militia members planned on storming the U.S. Capitol days in advance of Jan. 6 attack."

The National Pulse commented that the Washington Post story, written by three non-political reporters, "illustrates just how out of control the blatant misinformation about 'incitement' by the president has been over the past two weeks."

The affidavit stated: "Evidence uncovered in the course of the investigation demonstrates that not only did CALDWELL, CROWL, WATKINS and others conspire to forcibly storm the U.S. Capitol on January 6, 2021 – the communicated with one another in advance of the incursion and planned their attack."

The affidavit states some of the perpetrators prepared ahead of time with "helmets, reinforced vests" and more.

Among the items found in a search of the defendants' homes were "a camouflage hat and jackets; a backpack with medical/PPE supplies; a black tactical kit with medical supplies, radio, mini drone, and pepper spray; a bag containing a helmet and respirators; and a bag containing a helmet, radio, and belt … cellular telephones; numerous firearms, a paintball gun with rubber-steel balls and a cylinder."

The FBI agent explained there were Facebook comments dating back to Dec. 24 about a plan for defendants to meet up. On Dec. 30, a statement said, "This is our call to action … see you on the 6th in Washington."

Other messages were exchanged in the plan for action on Jan. 6, the FBI affidavit said.

Politico reported on Wednesday that Pelosi was doubling down, saying Trump also could be considered an accessory to murder.

"Presidents' words are important. They weigh a ton," she said. "And the crime, in some cases, was murder. And this president is an accessory to that crime because he instigated that insurrection that caused those deaths and this destruction."