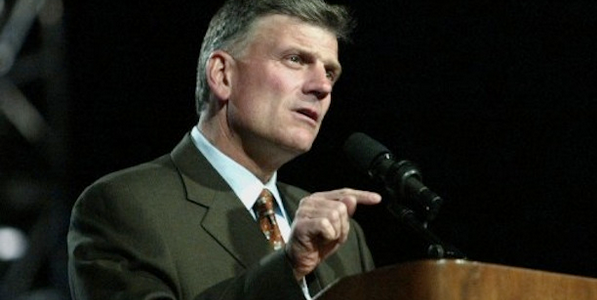 An activist group accusing former President Trump, Sen. Josh Hawley, R-Mo., Sen. Ted Cruz, R-Texas, and evangelist Franklin Graham of "inciting the attack on the U.S. Capitol" is urging board members of the two ministries Graham leads to fire him.

Board members of Samaritan's Purse and the Billy Graham Evangelistic Association – for which Graham serves as president and CEO – are the targets of a petition drive by the group, Faithful America.

Faithful America is described by D. James Kennedy Ministries as "a left-wing group" founded by the National Council of Churches and funded in the past by George Soros.

FA also has launched a campaign to prevent anyone from publishing Hawley's new book.

Graham, the group contends, "is still doing everything he can to support Trump's deadly presidency, recently tweeting, 'When he says this election was rigged or stolen, I tend to believe him.'"

The organization, which has the slogan "Love thy neighbor. No exceptions" at the top of its home page, blasted Graham.

"Even Trump's incitement of insurrection has not shaken Graham's idolatry," the group said. "On January 14, Graham literally compared Trump to Jesus, accusing Republicans who voted for impeachment of accepting 'thirty pieces of silver' to betray him."

It accused Graham of shrugging off the deaths of five people in the Jan. 6 riot in Washington.

"There is absolutely nothing Christian about that."

The group is led by Nathan Empsall, who holds a degree in environmental management and previously worked with Barack Obama's nonprofit Organizing for America.

"This is just one more stunning display of the left's bitter intolerance and its self-righteous determination to banish biblically faithful voices from America's public square," said Frank Wright, president of DJKM.

"Franklin Graham is an international evangelist and a renowned humanitarian whose organization, Samaritan's Purse, delivers aid across the world to people in need. He is also an outspoken defender of Biblical moral values at a time when the left is determined to purge competing voices from American public life," he continued.

"That is why D. James Kennedy Ministries is collecting signatures on our I'm With Franklin! open letter for delivery to our friends at the Billy Graham Evangelistic Association and Samaritan's Purse.

"We want him, as well as the boards of BGEA and Samaritan's Purse to know that faithful believers in Jesus Christ love Franklin and stand with him," he said.

Samaritan's Purse, under Graham's supervision, has provided emergency mobile hospital facilities in several places over the last year to assist with the flood of COVID patients.

DJKM described the FA effort as "a vicious petition campaign to force Franklin Graham out as president and CEO of the Billy Graham Evangelistic Association and Samaritan’s Purse."

The letter in support of Graham describes him as "a beloved humanitarian statesman, an international evangelist and a faithful follower of Jesus Christ."

The charge against him is "false, inflammatory, and utterly unfounded," DJKM said, citing the facts:

Graham, several weeks ago, pointed out that Trump was proven right many times, including in his claims that Barack Obama spied on his 2016 campaign and that there was no collusion with Russia.

"When President Trump says that this election has been rigged or stolen, I tend to believe him. He has a track record of being right. Pray for President Trump, pray for Joe Biden, and pray for our nation—that we will get through this, and for God’s will be done," Graham wrote at the time in a Facebook post.