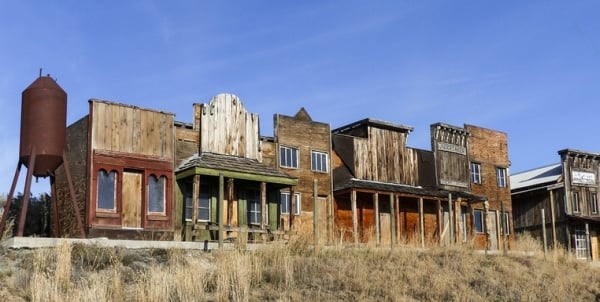 Two weeks to the day after a mob stormed the U.S. Capitol in an attempt to prevent Congress and the Electoral College from doing their duty, the Trump era came to a close when Joseph R. Biden Jr. took the oath of office as the 46th U.S. president. “We must end this uncivil war that pits red against blue, rural versus urban, conservative versus liberal,” the new president said. “We can do this if we open our souls instead of hardening our hearts.”

The message was great. All the pundits said so. But other than the media, assorted members of government and Lady Gaga, who belted out the National Anthem into a golden microphone and wore a giant broach that looked like something out of “The Hunger Games,” no one listened.

At least, no one listened in person. Joe Biden and Kamala Harris were inaugurated in a ghost town, a capital city occupied by more combat-ready American soldiers than are now deployed in either Afghanistan or Iraq. It was as different as it could be from the inauguration four years ago when the chaos candidate became president.

The Secret Service, the agency credited (or blamed) for the armored cars, steel fences, concrete barriers, and legions of National Guardsmen in the streets of Washington, D.C., ruined the plans of any tourist unfortunate enough to travel here this week. Most everything was closed ahead of Wednesday. They shut down the National Mall, set up check points with roadblocks and razor wire across downtown, and established a security perimeter akin to the “Green Zone” in Baghdad. (House Speaker Pelosi reportedly wanted crew-operated machine guns deployed onsite, a request denied by the Department of Homeland Security on grounds that heavy weapons were not appropriate for civilian occasions.) Soldiers in full kit cradled M4 carbines, and shop owners who forgot to cover their windows during the unrest last summer prepared for the worst by putting up plywood boards.

Mayor Muriel Bowser, who oversaw much of these preparations, had asked her city’s residents to stay home. “Enjoy it virtually,” she pled. “We know this is the right request for our public safety and our public health.” And they listened. While revelers passed around bottles of Veuve Clicquot just blocks from the White House when the Associated Press finally called the race for Biden, inauguration celebrations were socially distanced. A disappointed vendor hawking Biden and Harris merchandise at Black Lives Matter plaza summed up the day with one word: “Thin.”

What crowd there was consisted mostly of photographers and foreign press milling about, waiting their turn to interview the handful of Biden supporters present. A loudspeaker blared the president’s speech at an unnecessary volume considering that the empty downtown streets were uncharacteristically quiet. Here and there, however, tiny contingents of ordinary Americans tried their best to witness an extraordinary event.

“My parents called,” Olivia Wisont told me after the speech. “They expressed their strong preference that I don’t come out and stay on campus.” But the freshman at George Washington University had cast the first vote of her life for the Biden-Harris ticket back home in Seattle, as did her two friends from New York. The lonely trio explained that Inauguration Day  was too important to miss. A little girl in a pink sweatshirt agreed. She held up a tiny blue Post-it note that read “Go Joe!”

Beyond another checkpoint, manned by TSA agents too bored to bother patting me down, another group of students said the same. They took the subway from American University to try and get as close as they could to the White House. What are their hopes for the incoming administration? Amanda Jordan said she would like the government to focus on “climate change.” Lucy Matthews wanted “more vaccines.” Their parents also preferred they watch the inauguration from the dorm rooms. “But it’s completely safe,” Matthews insisted. “There’s National Guard everywhere, and nothing is happening.”

And those soldiers were everywhere. They had been objects of affection earlier in the week as members of Congress and local businesses showed their gratitude for the protection by bringing them doughnuts and coffee in the morning and burgers and pizza at dinnertime (one pizzeria donated over 1,500 pies). But come Inauguration Day, the guardsmen just didn’t have much to do. Four years ago, it was different. They could have helped then. They might have kept me out of the hospital.

Demonstrators were out in force at Donald Trump’s inauguration. Most of them protested the 45th president peacefully by carrying signs, singing songs, and chanting slogans such as “Love trumps hate!” Others, though, chucked rocks at cops. Masks were unnecessary then, unless you didn’t want to be identified, and there wasn’t really a word for the hooligans dressed head-to-toe in black who formed their own line to push back riot police trying to clear them out of McPherson Square. My editors at the time suggested a quick article on the scuffle, and I hustled toward the sound of flashbang grenades. I stopped long enough to watch a protester dousing his own face with milk.

Proteins in dairy can dissolve hydrocarbons like those found in pepper spray, I learned later. The protester emptied an entire gallon on his eyes. This didn’t strike me in the moment as ominous, only odd -- just like the man who brought llamas into the city, or the Code Pink protesters who fell to their knees screaming at 12 p.m. (the constitutionally prescribed moment when Trump turned from B-list celebrity to leader of the free world). But when words and screams failed them, many demonstrators turned into rioters. My introduction to mob politics came as the rabble took out their anger on the windowpanes of coffee shops and banks and restaurants. Suddenly enemies of public transportation, they inexplicably trashed a bus stop. It was thrilling nonsense, like the man who scooped up a tear gas canister, hurled it back at the police, then scurried up a tree for protection. Wouldn’t that make an interesting picture? I ran over to snap a photo, confident that the press credentials swinging around my neck would keep me out of any trouble.

Photography, it turns out, was discouraged. A vigilante dressed in black informed me of this by yanking my phone from my hands and shattering it on the ground. Next, something blunt hit my head. A few moments later, I woke up in the road. I walked back to the newsroom nauseous with ringing ears. Protesters would torch a limousine that night and defend barricades made from pushed-together trashcans and flaming newspaper boxes. I filed my story and then went to the hospital emergency room.

Nothing like that happened this time, and McKenzie Levie was disappointed. “No extremists came to town,” he told me while standing in the street outside the FBI building downtown dressed in full chainmail. “I just look like one.” A self-appointed protector of the peace nicknamed the “Alt-Knight,” Levie usually mixes it up with antifa types at protests. He travelled from Cleveland to do so this time. Because none showed, his crusade ended early. So did my day. There were a few other characters, like the street preachers in search of a congregation, but little to note.

The crowds, or lack thereof, didn’t register at the White House during Jen Psaki’s first briefing as Joe Biden’s presidential press secretary. Sean Spicer entered that role four years ago, earning lasting scorn among the press corps by claiming erroneously that Trump had “the largest audience to ever witness an inauguration, period, both in person and around the globe.” Psaki, for her part, said she welcomed disagreements but told reporters they shared a common goal of “sharing accurate information with the American people.” She took multiple questions (none about crowd size). She promised not to lie. She also promised to hold daily briefings, closing out the briefing telling the reporters, “Let's do this again tomorrow.”

Presidents normally close out the day with a series of inaugural balls where lobbyists do their best to cozy up to the new administration, and journalists angle for scoops from sauced staffers. The pandemic and the security lockdown ended that tradition, as least this time. Biden settled instead for a dazzling fireworks show that punctuated a star-studded television special broadcast from the steps of the Lincoln Memorial. Tom Hanks hosted. Bruce Springsteen kicked off the event singing “Land of Hopes and Dreams.”

Biden gave brief remarks there on the steps, a CliffsNotes version of his earlier address, shortened for prime time. “Thank you for this honor,” he concluded. “I will give my all to you.” After John Legend and Katy Perry ended the production with separate numbers came the fireworks, big explosions of red, white, and blue whose echoes reverberated through an empty capital city and into the Virginia and Maryland suburbs, marking the end of an otherwise unusually quiet Inauguration Day.