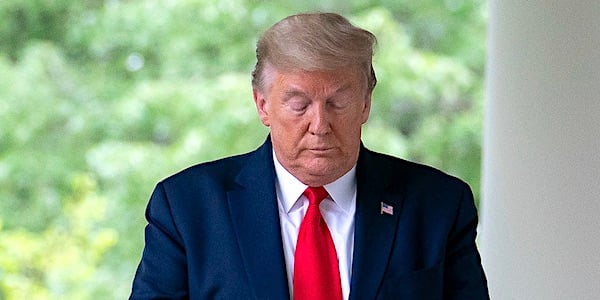 After House Republicans blocked a measure calling on Vice President Mike Pence to invoke the 25th Amendment to remove President Trump from office, Democrats formally introduced an article of impeachment against the president on Monday, charging him with "incitement of insurrection" in connection with the massive breach of the U.S. Capitol.

House Speaker Nancy Pelosi, D-Calif., insists that while there are only nine days remaining in Trump's term, the president is "unhinged" and must be removed as soon as possible. She plans to hold a vote Wednesday.

However, the Senate will not be in session until Jan. 19, and the chamber would need all 100 senators to agree to take up an impeachment trial, which is unlikely. Constitutional scholars argue the Constitution makes no provision for impeaching a former president.

Pelosi acknowledged in an interview with "60 Minutes" on Sunday night that one of the Democrats' objectives is to ensure that Trump cannot run for president again.

She said "that's one of the motivations that people have for advocating for impeachment."

CBS News' Lesley Stahl asked, "Won't that take more than the 10 days, and does it actually make sense?"

Pelosi replied: "Well, I like the 25th Amendment, because it gets rid of him. He's out of office. But there is strong support in the Congress for impeaching the president a second time."

Tonight, in the first interview with Speaker of the House Nancy Pelosi since a mob smashed its way through the Capitol, Speaker Pelosi tells Lesley Stahl one motivation for impeaching POTUS is to assure he never runs for the presidency again. https://t.co/GB0n5UOLgK pic.twitter.com/aU6dCSO2BQ

Manchin noted that Democrats have only 48 seats until the two Georgia Democrats are seated, which might not be until after the 20th. With 67 votes required to convict, 19 Republicans would have to join the Democrats to remove Trump.

"We've been trying to send the over (to the House) -- they know the votes aren't there," he said.

"I think this is so ill-advised for President Biden to be coming in, trying to heal the country, trying to be the president of all the people when we're going to be so divided and fighting again," the senator said.

On Friday, Pelosi said in a call with the Democratic caucus that she contacted the chairman of the Joint Chiefs of Staff, Mark Milley, to discuss "available precautions" for preventing what she called "an unstable president" from accessing the nuclear launch codes or initiating military hostilities before leaving office.

The 25th Amendment resolution sponsored by Rep. Jamie Raskin, D-Md., which was immediately blocked by House Republicans on Monday, accused Trump of being unable to perform "the most basic and fundamental powers and duties of his office."

More than 210 Democrats have joined Raskin, Ted Lieu, D-Calif., and David Cicilline, D-R.I., in an "incitement of insurrection" article of impeachment.

It charges Trump has "demonstrated that he will remain a threat to national security, democracy and the Constitution if allowed to remain in office and has acted in a manner grossly incompatible with self-governance and the rule of law."

"[I]ncited by President Trump, members of the crowd he had addressed, in an attempt to … interfere with the Joint Session’s solemn constitutional duty to certify the results of the 2020 Presidential election, unlawfully breached and vandalized the Capitol, injured and killed law enforcement personnel, menaced Members of Congress, the Vice President and Congressional personnel, and engaged in other violent, deadly, destructive, and seditious acts," the impeachment article states.

It charges Trump "gravely endangered the security of the United States and its institutions of Government ... threatened the integrity of the democratic system, interfered with the peaceful transfer of power, and imperiled a coequal branch of Government."

"He thereby betrayed his trust as President, to the manifest injury of the people of the United States," it says.

The president's supporters argue that at the rally in front of the White House last Wednesday, Trump made no calls for violence after presenting detailed evidence to back his case for voting irregularities and fraud in six states. In fact, he urged people express themselves "peacefull and patriotically."

Trump added, "Everyone here will soon be marching over to the Capitol building to peacefully and patriotically make your voices heard."

The impeachment article also cites Trump's leaked call with Georgia Republican Secretary of State Brad Raffensperger, contending the president urged him to "find" enough votes to change the outcome. However, a transcript shows Trump, in the context of a legal settlement, was making a detailed argument, presenting evidence of election fraud and irregularities.

President-elect Joe Biden told reporters Friday that while he thinks the president should have been impeached a long time ago, it's better to simply allow for the transfer of power on Jan. 20. He emphasized, however, at a news conference in Wilmington, Delaware, his long-held belief that Trump "is not fit to serve." And he said it's ultimately up to Congress to decide.

Biden said "the idea that I think he shouldn't have been out of office yesterday is not the issue."

"The quickest way that that will happen is us being sworn in on the 20th," he said.

The House passed two articles of impeachment against Trump in December in relation to his phone call with Ukrainian President Volodymyr Zelensky. The Senate acquitted him in February on both articles, abuse of power and obstruction of Congress.

Democrats charged Trump was trying to influence the 2020 election on his behalf by threatening to withhold aid if the Ukrainian president did not look into the apparent conflict of interest in Hunter Biden's role with a corrupt Ukrainian firm while his father was in charge of U.S. policy for the country.

The aid was delivered, however, and further evidence arose in October giving weight to the president's concern about corruption by American citizens. After the Nov. 3 election, the Biden transition team acknowledged that Hunter Biden is under investigation by the FBI for his taxes.