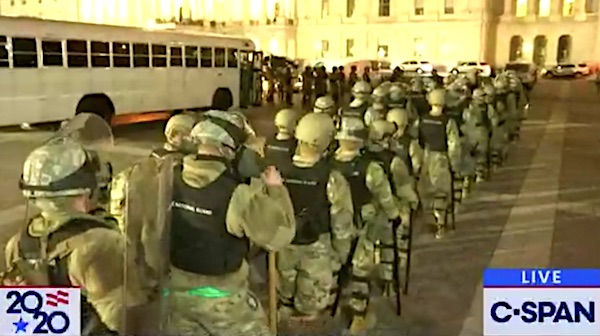 The National Guard and riot police at the U.S. Capitol on Wednesday, Jan. 6, 2020. (Video screenshot)

Nearly three-fourths of registered voters are worried about violence before President-elect Joe Biden’s inauguration, according to a poll published Friday.

The Hill-HarrisX poll found 73% of voters are somewhat or very concerned about violence leading leading up to Jan. 20. It also showed that 27% were unconcerned.

Security measures for the inauguration have increased substantially since Jan. 6, when a mob breached the Capitol building. The deadly riot grew from a protest against Congress’s certification of the presidential election results.

Multiple agencies, including the Metropolitan Police Department and the FBI, are teaming up with the Secret Service to help with inauguration security.

Around 21,000 National Guard members will head to Washington, D.C., Army Gen. Daniel Hokanson, chief of the National Guard Bureau, told Vice President Mike Pence on Thursday, according to The Associated Press. Officials have said more National Guard troops may be added depending on security threats.

The poll surveyed 2,854 registered voters and there was a margin of error of plus or minus 1.8 percentage point. The poll was conducted from Jan. 8 through Jan. 11.