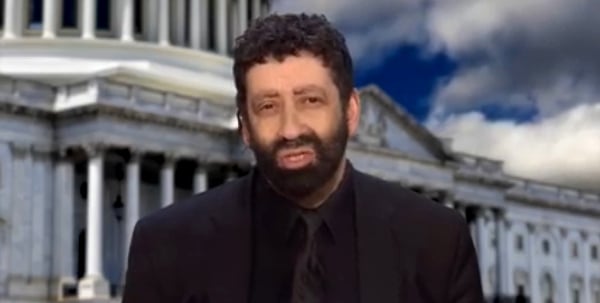 "The propitious smiles of heaven cannot be expected on a nation that disregards the eternal rules of order and right that heaven itself has ordained," Washington told the nation.

Cahn said in his video, posted Monday on YouTube, that there's a message for the current president and the nation he leads.

"If America follows the ways of God, the blessings of God will remain," Cahn said. "If it doesn't, they will be removed."

Cahn, known for his bestsellers including "The Harbinger," led a massive gathering on the National Mall in September calling for a "return" to God. Later, he urged Americans to pray and fast on Election Day, warning the nation was "standing at a crossroad and a precipice."

Now, in the wake of the riot at the Capitol, he said, "division infects the land" along with the COVID-19 pandemic "that has kept its citizens masked and locked in their houses."

It appears, he said that "the smiles of heaven are being removed from the land" as people disregard "the eternal rules of order and right."

"America has turned away from God and let in other Gods and served them, embracing the ways of immorality," said Cahn.

"We've passed down rulings from Washington, D.C., that war against the eternal laws of heaven, on human life, human nature, gender, marriage," he said. "We've indoctrinated our children against the ways of God."

Cahn said Americans have "done as we were warned not to do, and then we wonder why the blessings of heaven are being removed from our land."

He noted the pattern of God's judgment from the Old Testament that he discovered were remarkably repeated in the Sept. 11, 2001, attacks, including on the spot where George Washington stood and prayed on the day of his inauguration. For Israel, he noted that after such a warning, there was a window of time of 19 years to return to God before judgment, or "great shakings" began. Clearly, 19 years after 2001, America suffered a year of "great shakings."

He directed his words to the current president.

"Mr. Biden, you have called for unity and peace. But how can a nation have unity and peace when it wars against the very foundation on which it stands?" he said.

Cahn said the nation can't have unity and peace when it has "turned against the God who brought it into existence."

Addressing Biden, he asked how the president can place his right hand on the word of God "and then with your right hand sign laws into existence that war against his word?"

"How can you invoke the name of God in your oath and lay your hand upon his word and then implement laws that will suppress the going forth of his word, that will censor his word and those who advance it?" Cahn asked.

He warned that Biden, his administration and lawmakers will be called to account some day by God for their actions.

"The problem is not social or economic or cultural or political, the problem is ultimately spiritual. And so must be the answer.

America's only hope is to return to God.

"Choose true greatness and lead in that return, or continue in this departure from God, to destruction and judgment," the rabbi said.

He said that "to those who love the nation and fear for its future, the only hope is revival."

"Revival only comes through repentance and return," he said.

Cahn said that if darkness comes, God reminds us to fear not, because, he still has the ultimate authority, and the darkness cannot overcome the light.

"If the darkness should grow darker, then it's time for the lights of God to shine even brighter."