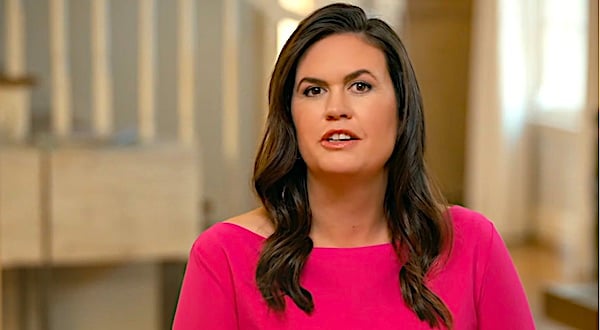 Sarah Huckabee Sanders, the former press secretary to President Donald Trump, announced Monday that she will run for governor of Arkansas.

Sanders, an Arkansas native and daughter of former Arkansas Gov. Mike Huckabee, announced her decision in a recorded message, discussing her time in the Trump administration and criticizing the “radical left.”

“As governor, I will defend your right to be free of socialism and tyranny, your Second Amendment right, your freedom of speech and religious liberty,” Sanders said.

“To remain free, we must have law and order and resolve our differences peacefully. The radical left’s solution is to impose government control and censorship from the top down,” she added, saying that governors were “the last line of defense” against full Democratic control in Washington.

Sanders also referenced her two-year stint as press secretary, where she often clashed with reporters.

“I took on the media, the radical left and their cancel culture, and I won,” she said during her announcement. “As governor, I will be your voice. And never let them silence you.”

Despite her wide name recognition in her home state, Sanders will face a Republican primary in her bid to succeed Gov. Asa Hutchinson, who is ineligible for reelection after serving two terms. Tim Griffin and Leslie Rutledge, Arkansas’ Republican lieutenant governor and attorney general, have already announced bids of their own.

If elected, Sanders said that she would mirror Trump’s own agenda.

“I will not apologize for who I am or who I am fighting for,” she said. “I will not bow down to the radical left. Not now. Not ever.”