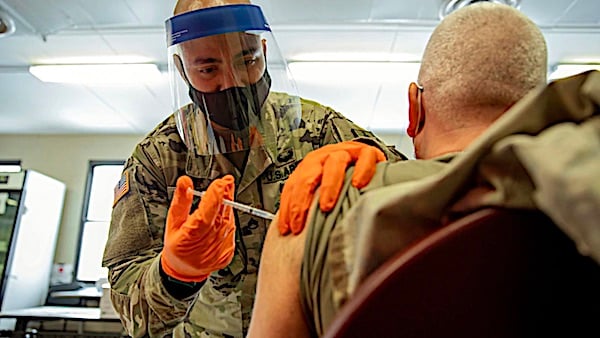 New York lawmakers are considering a bill that would allow the governor to "remove" anyone deemed a "threat" to health.

The plan essentially would give authorities permission to put citizens behind bars and vaccinate them without due process, reports the Western Journal's KrisAnne Hall.

"This bill is not only a threat to the Constitution of New York and the people of New York but also to everyone in America if you consider the way certain legislation can spread throughout America in this age of 'crisis,'" she wrote.

The bill's sponsor, Assemblyman N. Nick Perry, said it would "amend the public health law, in relation to the removal of cases, contacts and carriers of communicable diseases who are potentially dangerous to the public health."

However, the bill appears to conflict with the New York Constitution because it removes due process.

"Once some health department worker thinks a New Yorker is a carrier or contact to a carrier, that person could be seized and held without hearing, trial, due process or bond for a period of time to be determined by the health department," the report explained.

The bill provides that such a person shall no longer be denied bail after officials determine he or she "is no longer contagious."

The New York assembly website says the proposal is "active" before the health committee. It calls for the "removal and detention of cases" and says a person doesn't even have to be identified by name to be taken into custody. Only a "reasonably specific description" is required.

People who are detained can be held in "isolation."

However, no one shall be held for more than 60 days "without a court order." Detainees will be allowed to have legal counsel "to the extent feasible."

The prisoners also are banned from being "disorderly" and must not "leave or attempt to leave" jail.