Typically, when I noodle around the idea for a column I choose a subject of interest and start gathering links to relevant articles as I come across them. I seldom go looking for links; most often I just come across them as I peruse the news.

So when I decided to write about revenge – specifically, how the left is waging an all-out war on conservatives – I duly began gathering links. Imagine my surprise when I sat down to write this column and realized I had nine pages of links about leftist revenge … most of them gathered just in this latest blood-bath of a week.

Like most Americans, I'm still reeling from the reality of the coup d'état taking place under our very nose. Things are changing so fast – hour by hour, minute by minute – that doubtless this column will be out of date by the time I finish writing it.

So far leftist revenge has ranged from the massive (banning the president from all social media, taking down Parler) to the petty (Democrats drafting a bill to prevent anything being named after President Trump), but it all reveals a universal truth: Leftists hate and loathe the Constitution and Bill of Rights with a seething, burning passion. But hey, we knew this already, didn't we?

The left operates on a dangerous blend of arrogance and insecurity. They are arrogant because they have America by the short hairs, and they know it. They are insecure because their claims – that Trump incited violence during the Capitol riots, that the election wasn't stolen – are so baseless that they won't hold up to any scrutiny whatsoever. Their only solution to the possibility of the truth getting out is to erase, silence, eradicate, threaten, intimidate, close, sue, harass, fire, forbid, or dox anyone who speaks about it.

It's ironic that those who used to say they were all for "diversity" and "inclusion" now have the truth revealed once the velvet mask was ripped off. Instead, they want to silence and persecute anyone who differs than them. Far from being inclusive, they tyrannize anyone outside their echo chamber.

The reason for silencing the opposition is simple. Our Rights (that's with a capital "R") are derived from God, not government. Once the First Amendment topples – once freedom of speech, worship, and peaceable assembly is denied and persecuted – every other Right will soon follow (including the Second Amendment), and there will be no way to defend them.

Meanwhile the left has spent the last year ignoring examples of true hate speech, violence, arson, murder, non-peaceable assembly and behavior so egregious ("fiery but peaceful"?) that they've become a mockery of what they supposedly stand for. It's not domestic terrorism when Black Lives Matter or Antifa does it. Even left-wing Hollywood twits who object to silencing free speech are attacked by their own.

Trump won the election in a landslide so massive that the only way to cover it up was with colossal election fraud. The left is so terrified of the truth that they must move heaven and earth, including trashing the Constitution and Bill of Rights, to suppress it. They are now very busy rewriting not just history, but current events so they can convince present and future generations about their righteousness. The left is not just moving to erase the truth; they are moving to criminalize it.

Four years ago, columnist Kurt Schlichter wrote a sobering piece in Townhall entitled "The Left Hates You. Act Accordingly." He warned about the unspeakable evil these people live under, and their desperate desire to crush opposition: "They are fanatics, and by not surrendering, by not kneeling, and by not obeying, you have committed an unpardonable sin. You have defied the Left, and you must be broken. They will take your job, slander your name, even beat or kill you – whatever it takes to break you and terrify others by making you an example. Your defiance cannot stand; they cannot allow this whole Trump/GOP majority thing to get out of control. They must crush this rebellion of the normal, and absolutely nothing is off the table. … Their sick ideology and false theology requires that we be enslaved or exterminated – we can't be tolerated, and we certainly can't be allowed to hold the reins of power."

We are seeing the truth of Schlichter's prescient words. The left doesn't just hate us; they want us dead. As Parler CEO John Matze told Tucker Carlson, they don't just want to kill his company (Parler), they want to kill him. (On Saturday, Matze and his family were forced into hiding over death threats and security breaches.)

See? The right may disagree with you, but the left wants you dead.

The ironic thing is Biden and his team is still bleating "unity" (as if we believe them). In a "You just can't make this stuff up" example, after stealing the 2020 election in the greatest heist ever, Joe Biden announced the theme for his inauguration. Are you ready for this? It's "America United."

But "united" means something completely different to the left and the right. The left says "unity," but they mean surrender. They say "freedom," but mean oppression. They say "American," but mean leftist. They say "social justice," but want to silence half the nation. They say the words, but we must read the real meaning behind them.

"The only focus of everyone on the left is how they can eliminate conservatives from existing in America," notes Jared Dyson on the Liberty Loft. "Not just from holding political office, or from certain areas of society. The focus is on how to completely eliminate them from existence in any aspect of life."

Entertainer Travis Tritt agrees. "There is no incentive for conservatives to 'unify' with a party who has labeled us as racists, homophobes, mysogonists and ignorant deplorables," he said. "They aren't serious about unity. They want compliance and surrender. They will never get either from me."

The ugly, vindictive face of the left is now revealed. The coup d'état has stripped off any pretense of "unity" or tolerance. The left wants you silenced at best, and dead at worst. The Trump meme below has never been more true: 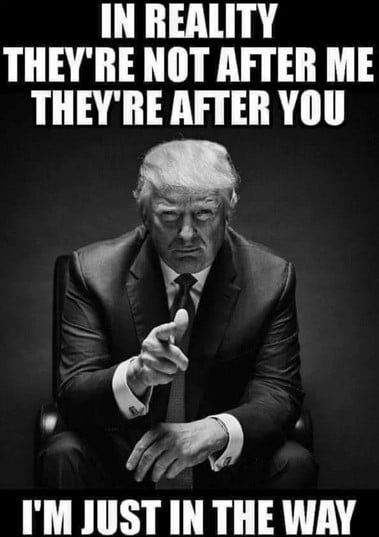 Remember how we were told Trump was the "threat to democracy"? This is a warning, folks. These people are not playing games. The left hates you. Act accordingly.