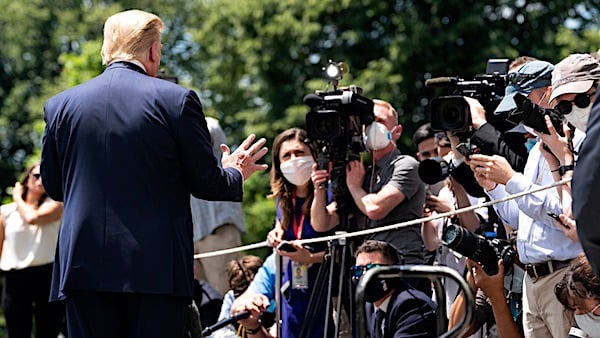 President Donald J. Trump takes questions from the press on the South Lawn of White House prior to boarding Marine One for Joint Base Andrews Maryland Saturday, May 30, 2020, for his trip to Cape Canaveral, Florida. (Official White House photo by Joyce N. Boghosian)

Back in the day, when I was managing editor at the Daily Inter Lake in Kalispell, Mont., I enjoyed the end-of-year ritual of voting in the Associated Press’s poll of the Top 10 news stories.

When I started participating in the year 2000, my list would include many of the same stories that made the final AP list, although often with differences in ranking. But by the time I retired in 2018, my view of the news had sharply diverged from the AP’s consensus view. I’d become something of a gadfly by then, questioning what seemed to be an ever more transparent left-leaning bias in mainstream reporting.

That divergence was probably magnified by the 2016 candidacy of Donald Trump and the bright light he had shined on Fake News, but my disenchantment with my profession had been growing for years, as chronicled in my book “The Media Matrix: What If Everything You Know Is Fake?”

Still, there is no way that even as recently as four years ago I would have predicted just how abysmally irresponsible the media would become by 2020. Major newspapers are winning Pulitzer Prizes for blatantly false reporting on topics such as “Russian collusion.” Meanwhile, Silicon Valley oligarchs have appointed themselves censors -- warning the American people not to read or watch anything that hasn’t been “fact-checked” by their hand-picked thought police.

The situation has gotten so bad that it’s no longer worth ranking the top news stories of the year because so little that is covered is news and so much that is news is written off as a “conspiracy theory.” That’s why I’m introducing Heartland Diary USA’s first annual presentation of “Last Chance to Wake Up and Smell the News They Tried to Kill.”

So here are five of the biggest suppressed stories of 2020. Pardon me if I don’t go into great detail on them, but the closer I get to the truth, the more likely that Google, Twitter and Facebook will bury my story, too.

5) Mysterious mutating lockdown: Has anyone ever figured out why it is OK for grocery store workers to remain on the job during an international pandemic while serving the needs of the entire population with no restrictions other than wearing a mask, but it is considered dangerous for gyms to open or, most ludicrously, for anyone other than spouses of governors to take their boat for a quick spin around the lake? It seems like the lockdown can turn into whatever is convenient for politicians. The uneven effects of the lockdown on different states and different sectors have resulted in the shift of trillions of dollars of capital in ways that will reshape the economy for generations to come, yet we are not supposed to talk about it.

4) Hydroxychloroquine: If you know anything about this drug, it is probably just that some guy in Arizona died after drinking it, and that maybe President Trump was somehow responsible. Well, as they say, a little knowledge is a dangerous thing. The guy in Arizona didn’t take hydroxychloroquine; he took a fish tank cleaner called chloroquine phosphate. And Trump never told anyone to take either the drug or the fish-tank cleaner. He just said hydroxychloroquine was a promising treatment against COVID-19. Of course, as soon as he said it, the radical academic leftists who control medical journals and associations warned that hydroxychloroquine had no benefit as a treatment and was potentially dangerous even though it had been safely used against malaria and various immune deficiency syndromes for decades. Fortunately, many doctors who were familiar with the drug continued to use it as a therapy in the early stages of COVID infections, and many patients around the world have been spared the most dire effects of the virus as a result. Just don’t expect to read about it in the New York Times.

3) Trump’s vaccine victory: While the president has been painted as anti-science, it was his administration’s support that led to the fastest turnaround ever from viral discovery to viral vaccine — essentially less than a year. Even as House Democrats are poised to launch investigations into Trump’s supposed crimes against humanity for being president during the COVID crisis, lives are being saved as a result of his policies. Just don’t expect to read about it in the mainstream media, which spent much of 2020 ridiculing Trump for his prescient predictions that a vaccine would be developed by the end of the year.

2) Hunter Biden’s laptop: The ability to bury the Hunter Biden story throughout the 2020 presidential campaign ranks as one of the greatest victories in the history of propaganda. Hunter is the son of former Vice President Joe Biden, and his acknowledged history as a drug addict is now considered his strong suit. The Senate Homeland Security Committee found extensive evidence that Hunter has made hundreds of millions of dollars for the Biden family by selling access to his father, so when Hunter’s laptop turned up with first-person incriminating evidence, it was pretty obvious that Joe Biden had a lot of answer for. Except that the media never made him answer for anything. It preferred to rest on the bizarre assertion from 50 former U.S. intelligence officials that clear evidence of foreign collusion on Hunter’s laptop had all the earmarks of a “Russian disinformation” campaign. This was errant nonsense. Reporters, read the emails!

1) Election fraud: It turned out that everything that happened in 2020 before Nov. 3 was just prologue for the greatest deception in American history — namely the hijacking of a presidential election through means both legal and illegal. Most importantly, every state that changed its election procedures without the consent of its legislature violated the U.S. Constitution. That’s why Republicans plan to challenge the Electoral College vote on Jan. 6. Whether you like Donald Trump or not should be irrelevant. You either follow the Constitution or you don’t. The fact that Trump increased his support in almost every demographic since 2016 and yet lost the election will apparently remain a mystery because the Democratic Party, with an assist from weak Republicans, is intent on continuing the charade that Joe Biden is a beloved elder statesman even more popular than Barack Obama.

I should add a disclaimer here. My list will not be your list. This is 2020, and there is plenty of suppression to go around. You are hereby invited to submit your own contributions in the comments section below. In the meantime, rounding out my Top 10, here are some of the other major stories suppressed in 2020:

The communist links to antifa and Black Lives Matter; how the Russian hoax was exposed but left unpunished; how the policies of a certain governor in New York state led to thousands of COVID deaths in nursing homes; the successful campaign of billionaire George Soros to subvert American jurisprudence by electing pro-criminal district attorneys; and of course the suppression of news itself.