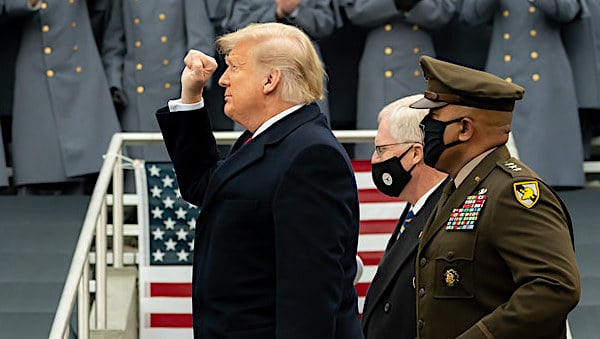 President Donald J. Trump gestures with a fist pump to the crowd of cadets as he arrives Saturday, Dec. 12, 2020, to attend the 121st Army-Navy football game at Michie Stadium at the U.S. Military Academy at West Point, New York. (Official White House photo by Shealah Craighead)

White House trade adviser Peter Navarro, whose comprehensive report  claimed election "theft by a thousand cuts," has released chapter 2, alleging the Democrats had a two-prong plan to tip the election to Biden.

In his "Stuff the Ballot Box" report, he says the plan consisted of dramatically boosting absentee and mail-in ballots in battleground states while restricting the verification of votes.

He says Democrats, along with "useful idiots" in the GOP, struck in Arizona, Georgia, Michigan, Nevada, Pennsylvania and Wisconsin to "tip the scales from a decisive legal win by President Trump."

"The Democrat Party relied primarily on legal means such as legislative and rule changes at the state level to implement its Grand Strategy and thereby achieve its illegal outcome. However, at times, political operatives advancing the Democrat Party’s Grand Strategy also bent, and sometimes broke, the laws and rules of that which is most sacred to our American public – our election system," his report states. "Key methods used by the Democrat Party to strategically game America’s presidential election included changes in the law approved by State Legislatures; rule changes and new guidance initiated by Secretaries of State or other election officials; court rulings and interventions; and the aggressive use of so-called 'public-private partnerships' to commandeer and manipulate the election process in key Democrat strongholds such as Wayne County, Michigan and Dane County, Wisconsin."

Navarro says the Democrats frequently "hid behind the shield of the Chinese Community Party (CCP) virus" to reach their goals and Wall Street oligarch George Soros, Silicon Valley oligarch, and Facebook CEO Mark Zuckerberg and others were "key political operatives."

He charges that Soros' money funded referenda aimed at undermining election laws and rules, and further "helped to elect puppet secretaries of state in Michigan (Jocelyn Benson) and Pennsylvania (Kathy Boockvar)" to help bend the rules.

And Zuckerberg's "half a billion dollars … helped engineer what was effectively a hostile Democrat Party public-private partnership takeover of what should otherwise be a nonpartisan election process."

"That the Democrat Party and its operatives have, up to this point, gotten away with Immaculate Deception (the first report) and Art of the Steal, represents a signal failure of the media, Republican state legislators, other Republican government officials across the battleground states, the Congress, and our judicial branch of government at both the state and federal levels," Navarro charges.

He says the Democrats possibly got their strategy to increase the number of ballots from a 2005 report from Jimmy Carter and former Secretary of State James Baker that warned of fraud in mail-in voting.

The decrease in ways to detect fraudulent ballots resulted in a dramatic increase in "the number of illegal ballots that would be counted in the battleground states." He cited relaxed ID verification, reduced signature matching, counting naked ballots, ballot curing and limited poll watching.

The changes came from rules by secretaries of state and other officials, "guidance" from election officials, court rulings and the influence of privately donated and directed money.

She also determined, unsuccessfully, that voters would have nine days after the election to fix their ballot if there were mistakes.

"Volumes 1 and 2 of the Navarro Report — The Immaculate Deception and The Art of the Steal — together make the strong case for a full investigation of the election irregularities and strategic gaming of our political process that in all likelihood have led to a stolen presidential election," the report says. "Any such investigation must begin immediately as this nation simply cannot risk the inauguration of a president who will be perceived by a large segment of the American people as illegitimate."