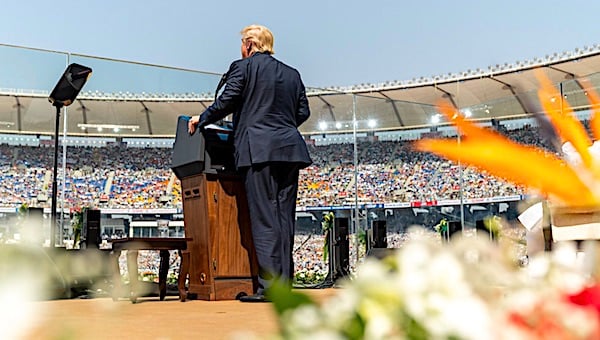 Now that President Trump is about to leave office, America will be left with the difficult task of "cleansing the movement he commands," warns ABC News political director Rick Klein.

"Even aside from impeachment and 25th Amendment talk, Trump will be an ex-president in 13 days. The fact is that getting rid of Trump is the easy part," he wrote in a commentary for the ABC News website.

"Cleansing the movement he commands, or getting rid of what he represents to so many Americans, is going to be something else," he said.

Trump will be an ex-president in 13 days. The fact is that getting rid of Trump is the easy part. Cleansing the movement he commands is going to be something else.
https://t.co/KnEloRm123 via @ABC

Klein accused Trump of encouraging the violence at the U.S. Capitol on Wednesday.

But the real problem is the supporters of Trump, he said.

"Until Wednesday's siege, when a mob of extremists engaged in an attempted insurrection and violent occupation of the Capitol, there seemed to be little cost to some Republicans in indulging Trump's conspiracy theories, lies and fantasies," Klein wrote. "That fiction was exposed by Wednesday's horror. The trauma of the day saw seemingly sincere concerns about election security melt away, amid a newfound bipartisan resolve to finish final certification of President-elect Joe Biden's victory."

He noted Trump's support for a law requiring prison for anyone who "vandalizes or destroys any monument, statue or other such federal property."

The president's concern at the time was the rioting by Antifa and others across hundreds of cities that caused an estimated $2 billion in damage.

"The nation will need to process the events of Wednesday for weeks and years to come, but a part of the many layers of healing will be a demonstration that those those (sic) involved in an insurrection face justice, an acknowledgment that we police Americans unevenly in this country and a commitment to try to fix that."

The Washington Examiner's Paul Bedard warned in a column on Klein's piece: "Beware, 75 million Trump voters. The media is calling for your ideological 'cleansing' of Trump thoughts."

Some media outlets have joined liberals in demanding a "list" of Trump aides and supporters to blackball them from jobs.