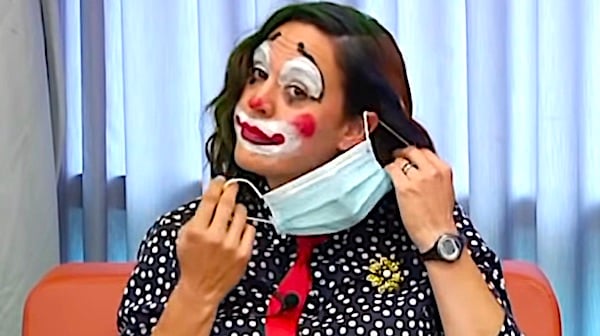 Claire Poche of the Oregon Department of Health dresses as a clown in October 2020. (Video screenshot)

Nancy Bush Ellis passed away at an assisted living facility the Sunday before last. Sister of George H.W. Bush, and aunt of George W. Bush, the New York Times obituary indicated the 94-year old died of “complications related to COVID-19.”

Some readers will want to stop right there. At a time when everything is political, some will ask if Bush Ellis died of the coronavirus, or with it. It’s not an unreasonable question considering her age, plus the CDC itself has indicated that somewhere north of 90% of coronavirus deaths have other, rather lethal illnesses associated with them.

But the main thing is that the where of Bush Ellis’s passing wouldn’t necessarily surprise readers of the New York Times. The newspaper has long reported that nearly half of all coronavirus deaths in the U.S. have been associated with nursing homes. While everyone will eventually contract the virus, it’s generally only lethal for those who are very old, and who are already very ill.

Fast forward to Monday of this week, a Times report (p. B5) on the slow rollout of the coronavirus vaccine indicated that “long-term care facilities” (think nursing homes, assisted living facilities, etc.) have “accounted for just 5 percent of coronavirus cases but 36 percent of virus related deaths.” About the death statistic, the speculation here is that with it having long been such a known about the where of U.S. coronavirus deaths, many elderly residents were removed; thus reducing from 45% the percentage of deaths associated with actual nursing homes. Either way, little has changed about the virus’s lethal qualities: older people with health conditions that are also life threatening are most threatened in a death sense by the coronavirus.

The Times is a great source of virus information for those willing to read past the headlines. At the same time, the newspaper continues to argue with itself. While readers willing to read far enough into its pages will find out that the virus is rather meek when it visits itself on healthy, relatively young people, the front page continues to promote a blood on the streets narrative driven by incompetence, science denial, and all manner of things Times readers aim to associate with the Right.

Case in point is a headline from the newspaper’s front page on Monday. It read “400,000 Deaths In a Year and Failure at Every Level.” It was authored by Sarah Mervosh, Mike Baker, Patricia Mazzei, and Mark Walker. About the headline, keep in mind that a deeper read of the January 18th edition (once again, page B5) would have informed someone innocent to the virus’s ways about how it is now, and has always largely been a threat to the very old who are already ill. This isn’t to minimize the old and sick as much as it’s to say that when the very old and sick die it’s usually very sad, but rarely a tragedy.

Better yet, the information on B5 should be read as a triumph when it’s remembered how very much nursing homes are a modern, first world creation born of immense progress in the healthcare space. That so many dying with the virus are old and in nursing homes speaks to endless “success at every level.” It used to be in the 19th and early 20th century that those born had as good of a chance of dying as living, after which those who survived infancy realistically had no chance of expiring in nursing homes. For one, they didn’t exist. For two, pneumonia, tuberculosis and other near-certain killers got to Americans long before they could ever be committed to assisted living.

It’s a long way of saying that the Times’ front page is at argumentative odds with the reporting inside the same New York Times. Really, how could 400,000 deaths that were mostly experienced by very old people who were already very sick in any way correlate with “Failure at Every Level”? Do Mervosh, Baker et al really believe that a “science” embracing president like Joe Biden would have possessed the knowledge and management skills to save the lives of the already dying? It seems they do.

They ran a quote from the then president-elect promising that “We will manage the hell out of this operation. Our administration will lead with science and scientists.” It seems Biden believes he can lower the proverbial sea levels by virtue of being, well….Joe Biden. Reporters are rather gullible. Indeed, Mervosh et all expressed no skepticism about Biden’s assertion.

They also forgot that in the U.S., all 50 states are autonomous on most matters. This is what former President Trump soon realized when the virus started spreading. Each state had different approaches. Trump claimed power over them that was absolute, but Georgia and Florida approached the virus with a very light touch, while New York, California and New Jersey were very heavy-handed. Translated for those with limited knowledge of the Constitution, Trump’s embrace or dismissal of so-called “science” was in many ways immaterial.

So while the Times reporters claim that “Science was sidelined at every level of government” on the way to “Failure at Every Level,” the reality is that states were free to keep “science” off the sideline to their heart’s content. New York, California and New Jersey presumably did? How did it work?

To the above question, readers can decide on their own why the sidelining of “science” in states like Georgia and Florida resulted in much better virus outcomes than for the science-reverent states. But even then they’d probably be wasting their time. A more useful approach would be for people to read the Times in full. Deep inside the newspaper, they’ll continue to find what’s obscured by alarmism on the front page: those dying of “complications related to COVID-19” are generally people who are already very old and ill. In short, a focus on science really misses the point.