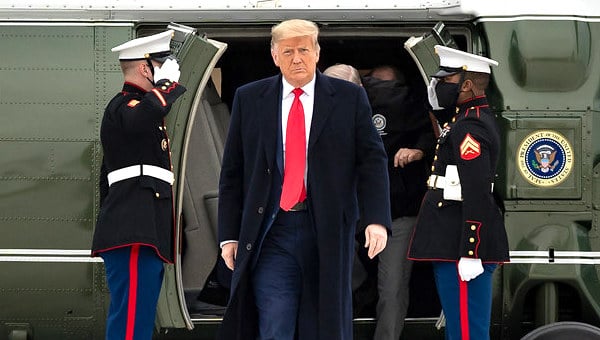 Charging President Trump incited an "armed rebellion" against the United States, House Speaker Nancy Pelosi on Wednesday said it "breaks my heart" to impeach the president and remove him from office.

Pelosi, commencing two hours of debate prior to the impeachment vote, invoked Abraham Lincoln's address to Congress in 1862 in which he spoke of, in her words, "the duty of the patriot in an hour of decisive crisis for the American people" to defend the Constitution.

"We know that we face enemies of the Constitution," she said. "We know we experienced the insurrection that violated the sanctity of the people's Capitol and attempted to overturn the duly recorded will of the American people.

"And we know that the president of the United States incited this insurrection, this armed rebellion against our common country," said the San Francisco Democrat.

"He must go," she insisted. "He is a clear and present danger to the nation that we all love."

The Democratic majority – along with 10 Republicans, including Rep. Liz Cheney, R-Wyo. – voted 232-197 to impeach Trump for a second time.

However, there won't be any trial in the Senate before Joe Biden is inaugurated on Jan. 20, Senate Majority Leader Mitch McConnell said in a statement after the vote.

"Given the rules, procedures, and Senate precedents that govern presidential impeachment trials, there is simply no chance for a fair or serious trial that could conclude before President-elect Biden is sworn in next week," he explained.

There is debate about whether or not an ex-president can be impeached. In any case, many analysts, including those who believe the president's conduct was impeachable, believe the Democrats overplayed their hand with an article of impeachment, "incitement of insurrection," that wouldn't hold up in a Senate trial.

Cheney is the is the chairwoman of the House Republican Conference Chair, the third-highest position in the House Republican leadership. The other Republicans who voted for impeachment were Reps. Anthony Gonzalez of Ohio, Jamie Herrera-Beutler of Washington, John Katko of New York, Adam Kinzinger of Illinois, Peter Meijer of Michigan, Dan Newhouse of Washington, Tom Rice of South Carolina, Fred Upton of Michigan and David Valadao of California.

Tuesday night, the House passed a resolution, 223-205, urging Vice President Mike Pence to invoke the 25th Amendment to remove Trump from office. The vote, however, was seen as symbolic because Pence has declared he will not take that action.

Concluding the debate Wednesday, Democratic Majority Whip Steny Hoyer of Maryland used the words of Cheney to make his case, noting she said, "There has never been a greater betrayal by a president in the United States of his office and his oath to the Constitution."

"Are we to remain silent in the face of Liz Cheney saying this was the greatest betrayal of the duty of the president of the United States in history?" Hoyer asked.

Pelosi accused Trump of lying about the outcome of the 2020 election, charging he "sowed self-serving doubt about democracy and unconstitutionally sought to influence state officials to repeal reality."

The president must be impeached and removed from office, she said.

"It gives me no pleasure to say this. It breaks my heart. It should break your heart. It should break all of our hearts," she said. "But your presence in this hallowed chamber is testament to your love for our country, for America, and to your faith in the work of our Founders to create a more perfect union."

Leading the Republican opposition, Rep. Jim Jordan, R-Ohio, said it's clear the Democrats' impeachment drive is "about politics ... about getting the president." 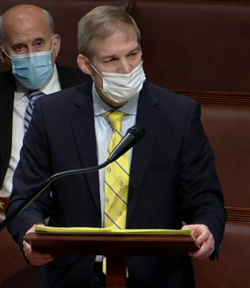 He pointed out that only 19 minutes after Trump was inaugurated in January 2017, the Washington Post published a headline saying "The Campaign to Impeach President Trump has Begun."

"And now, with just seven days left, they are still trying," Jordan said.

"This doesn't unite the country. There is no way this helps the nation deal with the terrible and tragic events of last week that we all condemned," he said.

Jordan said Republicans have been consistent in condemning violence, condemning it last summer and last week. It's clear, he asserted, that the Democrats' motivation is "to cancel the president."

"It's about politics," Jordan said. "This is about getting the president of the United States."

Americans are tired of the double standard. pic.twitter.com/rdlG2EHBCQ

The Ohio congressman also noted the Obama administration spied on Trump's campaign before he was elected, prompted the costly Mueller probe that chased bogus claims and engaged in a failed impeachment campaign based on an anonymous whistleblower who was biased against the president and who worked for Joe Biden.

"And now it's impeachment round two," he said. "It's always been about getting the president, no matter what."

The "obsession" has broadened he said, and now it's about "canceling the president and anyone that disagrees with them."

Jordan noted that the Democratic House Rules Committee Chairman, Rep. Jim McGovern of Massachusetts, objected to Electoral College votes in 2017 as did Rep. Jamie Raskin, D-Md., who is one of the nine impeachment managers.

McGovern argued that Democrat objections were a "protest" of "Russian interference" in the 2016 election, meaning "Trump-Russia collusion," which later was debunked by the Mueller probe.

Gohmert said Republicans didn't regard those statements as impeachable because "we didn't believe she surely meant that."

"But by the Democrats taking this action, you're telling me, no, when we say those, we actually mean to incite violence."

He accused the speaker and her allies of using impeachment for a second time within a year – this time with no investigation and no Judiciary Committee deliberation – "as a political weapon" and "destroying this little experiment in self-government."

Rep. McClintock, R-Calif., said he didn't like President Trump's speech on Jan. 6, contending the president was wrong about Vice President Mike Pence's role in certifying the vote and was "wrong to set such a confrontational tone in a politically tense situation."

"But what did he actually say?" the California congressman asked. "His exact words were, 'I know that everyone here will soon be marching over to the Capitol building to peacefully and patriotically make your voices heard.'"

McClintock argued that "if we impeach every politician who gave a fiery speech to partisans, this Capitol would be deserted."

"That's what the president did. That is all he did."

He argued that "every movement has a lunatic fringe."

"Supressing free speech is not the answer. Holding rioters accountable for their actions is the answer."

He added that if Black Lives Matter and Antifa rioters had been prosecuted "with the same determination" then "this incident may not have happened at all."

McClintock warned against being governed by "passions" and engaging in "vengeance," which is characteristic of "banana republics." He noted the many "provocative" speeches by Democrats that directly preceded violence last summer.

The congressman, like Pelosi, cited Lincoln, this time pointing to his call after the Civil War to "with malice toward none, with charity for all," "bind up the nation's wounds."

"I cannot think of a more petty, vindictive and gratuitous act than to impeach an already-defeated president a week before he is to leave office," McClintock said.

Joe Biden's promise to heal the nation, he charged, "becomes a hollow mockery" of "this unconstitutional act."

In her first remarks on the House floor, newly elected Rep. Nancy Mace, R-S.C., said she holds Trump accountable for the riot at the Capitol but objects to the rushed impeachment effort.

"The U.S. House of Representatives has every right to impeach the president of the United States," she said. "But what we're doing today, rushing this impeachment in an hour- or two-hour-long debate on the floor of this chamber, bypassing judiciary, poses great questions about the constitutionality of this process."

She said that if Congress is "serious about healing the divisions in this country, Republicans and Democrats need to acknowledge this is not the first day of violence we've seen."

"We've seen violence across our country for the last nine months," she said.