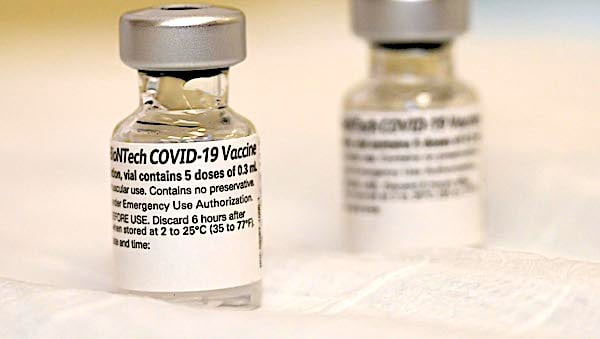 Vials of the Pfizer-BioNTech COVID-19 vaccine are at Walter Reed National Military Medical Center in Bethesda, Maryland, Dec. 14, 2020, following the vaccine's emergency use authorization by the Food and Drug Administration. (DoD photo by Lisa Ferdinando)

The vaccine developed by Pfizer and BioNTech protects against a highly contagious strain of coronavirus that originated in South Africa and the U.K., according to a study published Thursday.

The study, which was commissioned by Pfizer, is likely to alleviate some fears that the virus variant would evade protections offered by the vaccine.

Most scientists have said that they expected the vaccines to protect against the more contagious strain of the virus, which has been found in multiple states in the U.S. and dozens of countries.

But health experts had warned that though unlikely, it is possible that the virus will develop mutations that help it evade the vaccine.

The variant from South Africa and the U.K. is 56% more contagious than the original strain that began spreading across the globe last year, according to one study.

The Pfizer-backed study, which was published by the online journal bioRxiv and is awaiting peer review, found 20 patients who received the Pfizer-BioNTech vaccine were protected against the contagious strain of the virus. Scientists analyzed the serum of the patients in a lab setting, and found that the vaccine neutralized the more transmissible variant.

Albert Bourla, the CEO of Pfizer, said that the company was “encouraged” by the results of the study.

We are encouraged by early in vitro study findings that show the sera from people who have received the Pfizer-BioNTech #COVID19 vaccine effectively neutralized a SARS-CoV-2 virus having one of the mutations also found in two highly transmissible strains. https://t.co/y5BtV6gQjm https://t.co/nbdzwFlHSq

A vaccine developed by Moderna is also likely to be effective against the variant, the CEO of the company said at a health conference on Thursday.

Stephane Bancel, the Moderna executive, said that the company is close to releasing results from a study of the coronavirus variant.

Bancel also offered other reassuring news. He said that Moderna’s vaccine, which is also available in the U.S., is likely to offer protection for up to a couple of years.

“The nightmare scenario that was described in the media in the spring with a vaccine only working a month or two is, I think, out of the window,” Bancel said at the event, according to Reuters.