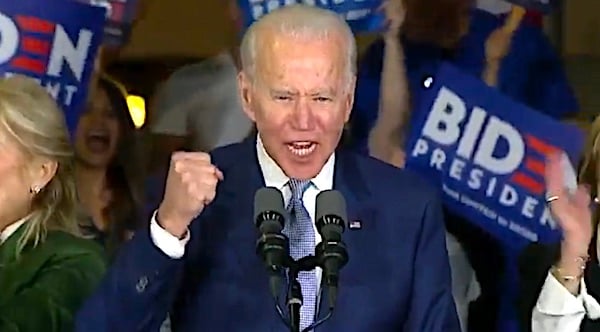 Joe Biden repeatedly during his campaign and after his election promise to "unify" the nation and work as hard for those who voted against him as those who voted for him.

"We should ignore the unity talk because everything he had done leans far left," the columnist wrote.

"Knitting together a fractured America around a far-left agenda was never going to work. And Biden knows it."

In fact, 44% of likely voters believe Biden is "more to blame for the division in America." The same figure, 44%, blame all "his political opponents."

Also, a huge 81% believe America is as badly divided now as it was before the election or even moreso.

Even 26% of Democrats blame Biden for dividing the nation, joining 66% of Republicans. Only about one voter in six thinks the nation is "more united."

Most voters think the country has become more divided since Election Day, including 38% of Democrats, 58% of unaffiliated & 75% of Republican voters.

In a commentary for The Hill on how Biden can achieve unity, Roger Myerson and Kael Weston said the president's goal "should not be to make them Democrats but to remind them that they should expect both major parties to offer policies for improving people's lives and protecting their communities."

"Americans must confront the divisive legacy of campaign arguments that an entire party was somehow trying to steal or destroy the country," they write. "The whole point of democracy is that voters can benefit from two parties competing to offer them better public service. The president must act now to reaffirm this vital truth in the reddest parts of America."

However, Goodwin insisted Biden's "unity" call is no more than "a disguised call to the factions in his own party to stick together, to give him a chance. I’ll keep you all happy, he’s saying, just watch."

The "dogma" of the "passionate far left" lives "loudly in the dozens of executive orders he's signed already," Goodwin argued.

Goodwin wrote that Biden is keeping his promises to do the "opposite" of Trump, but an "effective campaign tactic is economically disastrous as a governing principle."

Paul Bedard in his "Washington Secrets" colum said the poll also shows most Americans do not want Trump convicted in the upcoming Senate trial, "fearing by a wide margin that it will further divide the election-torn nation."

The poll found 50% were against conviction and 45% were for it.

"The Senate has already signaled that Trump’s enemies have fallen far short of the votes needed to convict the one-term Republican on a charge of 'incitement of insurrection' that occurred when pro-Trump protesters violently stormed the Capitol on Jan. 6," he explained. "However, Democrats are pressing ahead in part out of duty and because they want history to record the first second impeachment of a president."

Fifty-seven percent of voters believe the Democrats' move will "cause more division" in the country, and only 19% hold the belief that the partisan attack on a president no longer in office over an issue that is constitutionally questionable will "unite America."

Rasmussen's poll said 80% of GOP voters want Trump acquitted, and 75% of Democrats want him convicted. Among voters unaffiliated with a party, 54% say Trump should be acquitted.