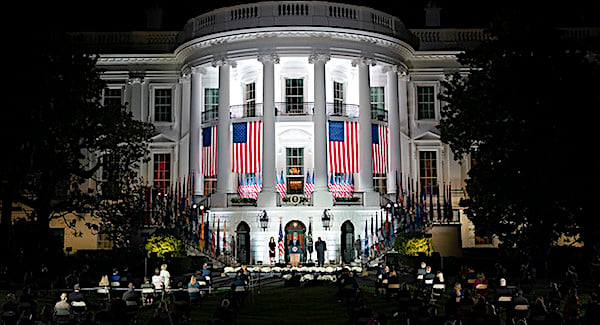 The Democrats' "snap impeachment" effort on the basis of speech alone sets a dangerous precedent that would allow for the impeachment of "any president" in the future, warns constitutional scholar Jonathan Turley.

House Speaker Nancy Pelosi insists that President Trump must take responsibility for the action of his supporters, charging he "incited" the rioters at the Capitol last Wednesday.

"Trump's speech does not meet the definition of incitement under the U.S. criminal code. Indeed, it would be considered protected speech by the Supreme Court," he said in a column on his website.

"Despite widespread, justified condemnation of his words, Trump never actually called for violence or a riot. Rather, he urged his supporters to march on the Capitol to express opposition to the certification of electoral votes and to support the challenges being made by some members of Congress. He expressly told his followers 'to peacefully and patriotically make your voices heard,'" Turley explained.

He noted Trump concluded his speech with: "Try and give our Republicans, the weak ones ... the kind of pride and boldness that they need to take back our country. So let’s walk down Pennsylvania Avenue."

Turley argued there was was no call for lawless action by Trump.

"Instead, there was a call for a protest at the Capitol. Moreover, violence was not imminent; the vast majority of the tens of thousands of protesters present were not violent before the march, and most did not riot inside the Capitol," he pointed out.

"Like many violent protests we have witnessed over the last four years, including Trump’s 2017 inauguration, the criminal conduct was carried out by a smaller group of instigators. Capitol police knew of the planned march but declined an offer of National Guard personnel because they did not view violence as likely."

Many of the president's supporters believe Democrats are pursuing impeachment with only days remaining in his term to prevent him from running in 2024.

"Congress is about to seek the impeachment of a president for a speech that is protected under the First Amendment. It would create precedent for the impeachment of any president who can be blamed for the violent acts of others after the use of reckless or inflammatory language," Turley warned.

Under the Democrats' theory, he said, "any president could be removed for rhetoric deemed to have the 'natural tendency' to encourage others to act in a riotous fashion."

"Even a call for supporters to protest peacefully would not be a defense," he said.

"In my view, impeaching on the speech alone would raise serious concerns over the use of impeachment in the future. Many Democrats, including members of Congress, refused to accept Trump as the legitimate president when he was elected and refused to do so as rioting broke out at the inauguration. Many of the same members have used the same type of rhetoric to 'take back the country' and 'fight for the country.' The concern is that this impeachment will not only create precedent for an expedited pathway of 'snap impeachments' but allow future Congresses to impeach presidents for actions of their supporters."

He pointed out that Democrats have a long record of making "inciting" statements but want to portray those statements as innocent.

"Democrats are pushing this dangerously vague standard while objecting to their own statements being given incriminating meaning by critics. For example, conservatives have pointed to Rep. Maxine Waters, D-Calif., calling for people to confront Republican leaders in restaurants; Rep. Ayanna Pressley, D-Mass., insisted during 2020’s violent protests that 'there needs to be unrest in the streets,' while then-Sen. Kamala Harris, D-Calif., said 'protesters should not let up' even as many protests were turning violent. They can all legitimately argue that their rhetoric was not meant to be a call for violence, but this is a standard fraught with subjectivity," he said.

Catholic League President Bill Donohue on Friday argued that Trump never instructed anyone to engage in violence while conceding, as critics say, that he "stoked people's passions."

House Speaker Nancy Pelosi downplayed leftists rioting, saying, "People will do what they do."

Donohoe also cited Pressley, who said, "You know, there needs to be unrest in the streets for as long as there is unrest in our lives, and unfortunately there is plenty to go around."

Donohoe concluded: "Many more examples could be given. In fairness, these comments, while incendiary, are not direct calls for violence. But it is also true that nothing Trump said was a direct call for violence either.

"Left-wing commentators and activists (pretty much the same these days) have no moral authority to lecture the rest of us about violence committed by right-wing protesters," he said. "They nurtured a climate of violence over the past year by giving Antifa and Black Lives Matter their blessings. If they were principled, they would do as the Catholic League does and condemn violent protesters regardless of their cause. But they are not."

Content created by the WND News Center is available for re-publication without charge to any eligible news publisher that can provide a large audience. For licensing opportunities of our original content, please contact [email protected]ewscenter.org.