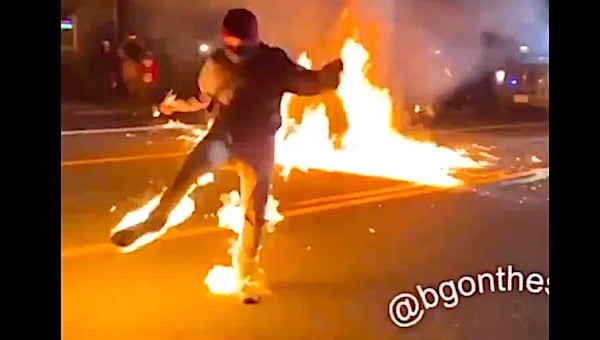 The mayor of Portland, Oregon said that it’s time to ramp up official responses to “lawlessness” after rioters targeted the federal courthouse on New Year’s Eve in a press conference Friday.

Democratic Portland Mayor Ted Wheeler said that his efforts to oversee and keep the peace at demonstrations haven’t worked and that it’s time to ramp up law enforcement’s response capabilities, video shows.

“My good faith efforts at de-escalation have been met with ongoing violence and even scorn from radical Antifa and anarchists,” Wheeler said. “In response, it will be necessary to use additional tools and to push the limits of the tools we already have to bring the criminal destruction and violence to an end.”

In his new year’s presser, Portland Mayor @tedwheeler admits that his efforts to de-escalate & compromise with antifa have failed to yield results. He condemns the violent extremist movement by name & calls for more to be done. https://t.co/1MJhHOxO1u pic.twitter.com/HtsSSM3dzz

Around one hundred rioters threw at least two “Molotovs cocktail-style firebombs” and commercial-grade fireworks at the federal courthouse and a county justice facility, the Daily Caller News Foundation reported. Some people attempted to break into the buildings in an effort to burn it down.

“Lawlessness and anarchy come at great expense and with great risk to the future of our community,” Wheeler said. “It’s time to push back harder against those who are set on destroying our community and to take more risks in fighting lawlessness.”

Wheeler said he “condemns” anyone who takes part in the criminal activity in Portland.

“In closing, once again, I condemn anyone who engages in violence or criminal destruction no matter what their ideology,” Wheeler added.

Several arrests were made in connection with the events Thursday night. The Portland Police Department did not respond to the DCNF’s request for comment.