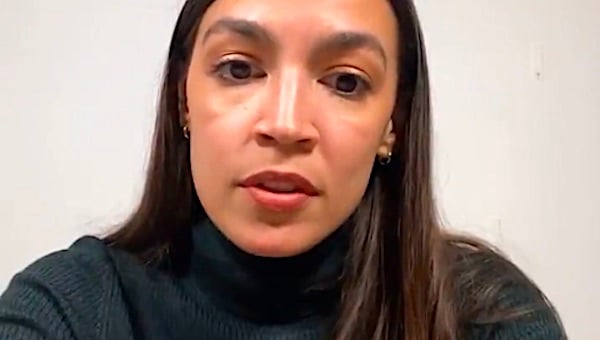 Democratic New York Rep. Alexandria Ocasio-Cortez said Tuesday that Congress is looking into reining in “our media environment” to prevent the spread of disinformation.

Ocasio-Cortez discussed how she feared for her life during last week’s Capitol Riot in a live stream on Instagram Tuesday evening, Fox News reported. A viewer asked Ocasio-Cortez if Congress is discussing “truth and reconciliation or media literacy initiatives” to help with healing following the turbulent events of the past few weeks, the publication reported.

“I can say, there is absolutely a commission being discussed but it seems to be more investigatory in style rather than truth and reconciliation, so I think that’s an interesting concept for us to explore,” Ocasio-Cortez said.

Ocasio Cortez noted that “several members of Congress” have brought up “media literacy” in these discussions.

AOC suggests adding “media literacy” as a mandate for a congressional “truth and reconciliation” committee pic.twitter.com/sv7UXMwvaO

“We’re going to have to figure out how we rein in our media environment so that you can’t just spew disinformation and misinformation,” she said.

The New York Democrat previously suggested that lists of Trump supporters should be made and used to hold the president’s supporters accountable in the future.

“Is anyone archiving these Trump sycophants for when they try to downplay or deny their complicity in the future,” Ocasio-Cortez asked the day before media outlets called the presidential race for Biden. “I foresee decent probability of many deleted Tweets, writings, photos in the future.”

Liberal media figures and outlets have also previously suggested that President-elect Joe Biden should take an aggressive approach to combating conservative media when he becomes president of the United States.

Journalist Glen Greenwald predicted in October that media will target Trump supporters even if Biden won the election, warning that Trump’s presidency enabled media “to elevate everybody’s fear level” and portray Trump as “a grave threat to everything that’s good” in modern society.

“There is no question that Democrats are gearing up to use their new power to apply far more pressure than ever on Facebook, Google, Twitter, etc. to censor any views they deem ‘threatening,’” Greenwald tweeted in November, referring to comments made by former President Barack Obama about controlling the internet with “a combination of government regulations and corporate practices.”

“Please look at what is going here,” Greenwald said. “Democrats are defining whoever opposes them not as adversaries but as national security threats, fascist terrorists, etc. — all to justify blocking them from the internet using their influence with Silicon Valley.”

The Intercept co-founder added that CNN, NBC, and The Atlantic are the outlets that are “most loudly” demanding that “disinformation” be suppressed, though these outlets are “the ones who not only sold the bullshit of the Iraq War but also the last 4 years of deranged Russia-took-over! conspiratorial insanity.”

“They want their discourse monopoly back,” Greenwald said.

The same day Greenwald made these comments, Crooked Media founder Tommy Vietor published a piece titled, “Why Joe Biden Must Sideline Fox.” Vietor lamented that Fox News is treated as a “legitimate news organization” and said that Biden’s team should “Approach Fox News with eyes, not arms, wide open.”

“Call Fox what it is: an extension of the Republican Party,” Vietor wrote. “Say it often. Repetitive messaging works—just ask Lyin’ Ted and Low-Energy Jeb. Reject the absurd insistence that the network has a ‘real news’ division.”

The Crooked Media Founder argued that Biden’s team should give his own publication, and other outlets like The Nation, “scoops and access” to help grow their audiences and “influence the way Trump’s team has nurtured fringe rags like Newsmax and OAN.”

CNN’s Brian Stelter also sparked a backlash in November for compiling a list of conservative media that he claimed is spreading “disinformation” on the election.

“There is an entire constellation of websites and talk shows that are in denial just like Trump,” Stelter said, showing a list of conservative media outlets that included Fox News, the Daily Caller, Newsmax, OAN, and others. “They are supplying disinformation about the election results, and wherever there’s a huge supply, there is a high demand.”