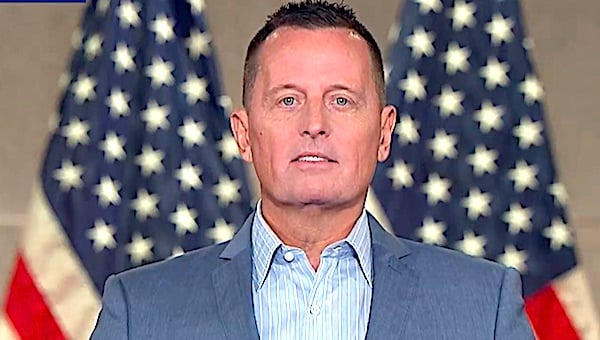 Amid a wave of resignations, onetime ambassador to Germany and acting director of national intelligence came to the defense of his former boss on Friday, arguing the "feeding frenzy" is mostly confined to Washington.

Trump is being judged by the Washington establishment's standard of what makes a good politician, he told Neil Cavuto in a Fox Business interview, and Trump is not a politician.

"I think there is a little bit of a feeding frenzy in Washington, and I just don't see it outside of Washington," he said.

About a dozen top- or mid-level administration officials have resigned this week, including Education Secretary Betsy DeVoss and Transporation Secretary Elaine Chao.

Grenell said he hasn't spoken with any of them and doesn't know their reasons but said he's "very proud of all the work that the Trump administration has done."

"I think that this president has done amazing work," he said. "I think his policies will live for a long time."

Cavuto, acknowledging Trump's many achievements, asked if the president has ruined his legacy by challenging the election outcome.

"Look, I don't buy that, Neil, I think 75 million people voted for Donald Trump," he said. "I think the media in Washington has never given him --

Cavuto cut him off, asking if as many would vote for Trump now, "given all that we've seen since."

"I do, I do," Grenell replied. "I think all of them and maybe even more, simply because they now see what the media has done."

He said it's also important to remember that "people understand that the media is biased, and they take a lot of this rush to judgment with a grain of salt."

He noted that every Republican in a position of power has "condemned this riot -- this political protest that turned into riots by some," referring to the breach of the Capitol on Wednesday.

Grenell noted he didn't see the same kind of condemnation from the left when there was violence in Portland, Oregon, last summer and on a baseball field, where Congress members were shot by a Bernie Sanders supporter.

Democrats, he said, "pick and choose when they talk about this violence."

"And I would even go so far as to say that Joe Biden and Kamala Harris have not been helpful in their comments. But they don't get the scrutiny, because the media and the political system in Washington, D.C., is very different than the rest of the country," he said. "And it's not being helped when we just do pile on."

'I don't have those fears'
Cavuto asked Grenell if he's worried, as are many in Washington, that Trump poses a danger in his remaining days in office.

"Look, I think this is a conversation that is intense in Washington, but it's not intense out in the rest of America," he said. "I do not see any Republicans who haven't been always needling President Trump, who haven't liked President Trump for the last four years, suddenly coming forward and saying anything different."

Their voices may be louder, he said, but they have been consistently "anti-Trump, never-Trumpers or people that just didn't like the president's style."

So they judge him, he said, for not being a "good politician."

The ways of Washington
Cavuto, citing a post-presidency interview in which Richard Nixon said his "style" ultimately doomed him, asked Grenell if he thought Trump's style of leadership "came back to bite him."

Grenell pointed out again that Trump is a nonpolitician who shouldn't be judged by political standards.

"I actually think that's a good thing," he said. "We shouldn't have these Washington standards."

He said the "ways of Washington" are exemplified by House Speaker Nancy Pelosi having the privilege of flying to San Francisco and getting her hair done.

Then, "when she's outed by the small business owner for being a hypocrite, what does she say? Nancy Pelosi says you owe me an apology."

The Washington way, he said, is that a president promises he will move the embassy to Jerusalem, and then "when you get to Washington, everyone is in on the joke that that's never going to happen, that was just a political promise."

Swampy behavior
Grenell proposed moving federal agencies outside of Washington to "get them in with the regular people."

"Get regular people, regular Americans the ability to work for the federal government and bring their ideas," Grenell said.

He said the description of Washington, D.C., as "the swamp" is apt, because "a swamp doesn't allow fresh water, fresh ideas to come in."

"A swamp is stale and it's the same old, same old, and it kind of entraps you and gets you smelly," he said.

Outside perspective is needed, he said, because the Washington establishment "is not thinking about regular Americans."

Cavuto concluded by asking Grenell if he thought it was "swampy behavior" for Trump to fire people "by tweet" rather than face-to-face.

"I wouldn't call it swampy," he said. "I would just call it a different style, and I'm not sure that you or I know the real details of how someone is let go."