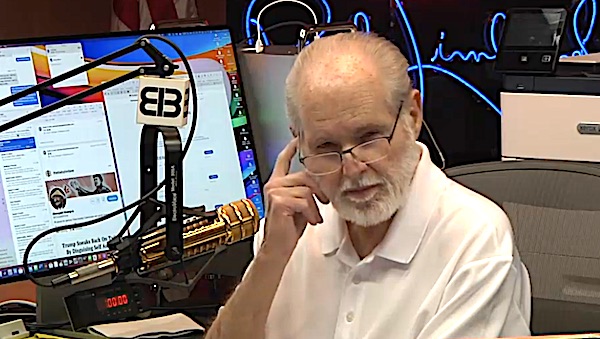 Talk-radio host Rush Limbaugh's website on Thursday featured the headline "Hundreds dead so far from COVID-19 today due to President Biden's mishandling of the virus."

"Isn't that the way we report this stuff?" he told his national audience. "I mean, that's how they reported it with President Trump. Except they were a little bit more critical than I was. I mean, they had thousands of people dying every day because of Trump. I reduce my number to 100. Over 100 people have died so far from COVID-19 due to President Biden's mishandling of the virus."

Limbaugh said the "Drive-By Media" will report that Biden inherited a "horrible coronavirus response" from Trump.

"This is what happens. You know, Obama takes office in 2009, and it takes, what, two weeks, and we are treated to the news, 'My God. The Bush economy was even worse than we thought. They left us a bigger mess than we thought.' Remember that? Don’t deny it, folks. That’s exactly how it ends up being reported. So Biden will be said to have inherited a bad coronavirus vaccine rollout, response, whatever. Just like Obama.'Oh, my goodness. They didn’t even tell us. It was worse than we thought.' Which was used to justify your taxes going up."

He cited similar claims from Bill Clinton when he took office in 1993.

Limbaugh, mimicking Clinton's voice, characterized the former president's response as: "And you know what, the Bush people, they lied, they lied to us. And we found it out. The economy is so much worse than what they told us. I thought I was gonna be able to have a middle-class tax cut. You remember I said so during that campaign. But, nah, can’t do it. I tried. I spent so much time working on it, but I can’t, gotta raise taxes."

"What did he do? He didn’t complain. He didn’t call a press conference in the Oval Office. He didn’t say, 'They lied to me.' He just worked himself to the bone to fix it," Limbaugh said of Trump. "And he did, to the point now that the New York Times and the Washington Post are suggesting that the Biden economic transition team had better do everything they can to rebuild the economy to what it was during Trump’s first three years."

Establishment media have blamed Trump personally for the death toll of the Chinese virus.

"He knew this was a threat and really did not do what was necessary to respond to it in a thoughtful and resourceful way," Whalen said.

However, the outbreak turned into a global pandemic one year ago as the communist regime blocked access and spread false information with the help of the World Health Organization. Trump, in fact, restricted travel from China on Jan. 28, prompting then-candidate Joe Biden to call him xenophobic. Trump then created the White House Coronavirus Task Force, which worked with the public sector to provide personal protective equipment and ventilators, and worked with the pharmaceutical industry produced vaccines five times faster than ever before.

"What's so troubling about this loss of life is it was preventable," claimed Steven Woolf of the Center on Society and Health at Virginia Commonwealth University. "This is an infectious disease we knew how to prevent."

He claimed the federal government "did not mount a response to wage war against this virus."

In fact, Trump recognized that the authority for public health policy resides mostly with the states. The death toll has been high in Democratic-run states such as New York, where Gov. Andrew Cuomo infamously ordered that nursing homes accept patients who were COVID-positive.

The AP also gave voice to John Swartzberg of the University of Califorina at Berkeley, who blamed a "bad administration."

Biden, meanwhile, has stated he wants to administer 100 million doses of the vaccines developed through Trump's Operation Warp Speed.

While the Trump administration delivered millions of vaccine doses to states, giving state officials the responsibility of distributing them, Biden's plan, the report said, is "to have a far more active and engaged role."

The AP characterized the combined efforts of the Trump administration, the health community and states as "a monumental wreckage."

The wire service said it took less than a year for the coronavirus to kill more than 400,000 Americans, while "it took almost four years for that many U.S. service members to perish in World War II."