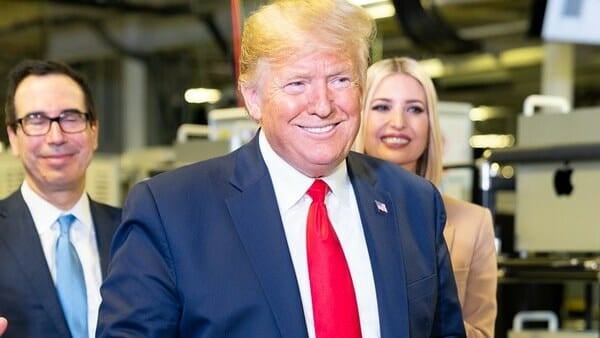 In its final days, the Trump administration is seeking to disrupt the way progressive activists increasingly impose their will on big business: through banks controlling the loan lifelines to the economy.

A regulation that could be approved this week aims to prevent lenders from blackballing businesses in industries opposed by the left by requiring banks to demonstrate that their loan decisions are “based on quantitative, impartial risk-based standards,” rather than political or reputational concerns.

The proposed Fair Access to Financial Services Rule (FAFSR) is a response to successful pressure campaigns waged by environmental groups and congressional Democrats, which culminated in every major American bank refusing to finance drilling projects in the Arctic National Wildlife Refuge (ANWR), despite such drilling being authorized by President Trump in 2017.

Bryan Hubbard, a spokesman for Office of the Comptroller of the Currency, told RealClearInvestigations that the rule codifies longstanding OCC guidance on banks’ obligation to provide equitable access to their services, and will ensure that banks are not “terminating entire categories of customers.”

If the rule is published in the Federal Register before Trump leaves office, it may be short-lived. Many Democrats oppose the measure and they will have 60 legislative days to disapprove the rule by a simple majority vote, as provided under the Congressional Review Act.

Nevertheless, the Arctic drilling conflict highlights the power of progressive groups to intimidate, cajole, and partner with corporate powerhouses to advance their agenda – often beyond the confines of the legislature. Through boycotts and other pressure campaigns, progressives have sought to push corporations to adopt their social and cultural values on issues ranging from climate-change policy to gun control. Firearms dealers, oil producers, payday lenders, and workers in other controversial industries have had their access to capital stunted by these campaigns, which are often aimed at the circulatory system of the economy – the banking industry.

The debate over drilling in refuge, the nation’s largest wildlife reserve, has raged since portions of the 19-million-acre area were first set aside under President Dwight Eisenhower in 1960. Twenty years later, President Jimmy Carter signed the Alaska National Interest Lands Conservation Act, which expanded the size of the reserve but opened up a coastal plain (the so-called “1002 Area”) to oil exploration, subject to prior congressional approval.

That authorization has proven elusive, as preserving ANWR became a cause célèbre among environmentalists.

In December 2017, however, President Trump signed the Tax Cuts and Jobs Act, which included a provision written by Alaska Sen. Lisa Murkowski authorizing oil exploration in the 1002 Area. The language opened a relatively small portion of the reserve – 2,000 of the area’s 1.57 million acres – to surface development.

The Republican lawmaker speculated that the project could generate “$60 billion in royalties for [Alaska] alone.”

In January 2020, a group of Senate Democrats sent a letter to all of the major American banks, requesting that they “stop financing ... oil and gas drilling and exploration in the Arctic National Wildlife Refuge” in order to better “prepar[e] the U.S. economy to weather the growing impacts of the climate crisis.” The letter echoed themes found in later pressure campaigns waged by such environmental advocacy groups as the Sierra Club and Greater Good.

By Dec. 1, every major American bank had announced its refusal to finance drilling in the region, despite it having been authorized for development by Congress.

In response, Murkowski and Alaska’s other members of Congress sent a joint letter to Federal Reserve Chairman Jerome Powell in June, urging him to take action. The delegation highlighted how the banks in question were using “reputation risk” – the risks associated with reputational disfavor brought by financing politically and morally controversial projects – as a justification to unilaterally deny Arctic drillers access to capital.

“By denying financing under the guise of reputation risk,” the lawmakers wrote, “these [banks] are discriminating against America’s interests, our economic recovery, and our workers, all while utilizing significant federal support and benefits.”

The regulation proposed by the OCC aims to end not only this standoff, but to ensure that other businesses “involved in politically controversial but lawful” industries are not excluded from capital markets.

The rule’s public-comment period closed on Jan. 4. Commenters across several industries wrote to the OCC in favor of the pending regulation.

“Just as with the management of these pension funds,” Brower wrote, “banks have also [succumbed] to pressure to terminate contractual lending relationships not based on business decisions, but rather from activist pressure.

“Unfortunately, there seems to be a trend of major lending institutions shirking their fiduciary obligations, citing ‘reputational risk’ and concerns over political repercussions in their decision making.”

Richard Lipsey, the chairman of Lipsey LLC, the largest firearms distributor in the United States, told the OCC that corporate activism and the fallout of Operation Choke Point – the since-abandoned Obama-era effort to cut off members of “high risk” industries, including firearms dealers, from access to the banking system – have made it difficult for firms in his industry to do business.

“Unfortunately, while [Operation Choke Point] is no longer in place under President Trump,” Lipsey wrote, “the financial institutions continue to discriminate against [firearms dealers] and systemically attempt to pick and choose the types of legal products they will tolerate their customers manufacturing and selling to law-abiding Americans.

“Operation Choke Point has effectively been privatized, away from the purview of elected officials and the voters they represent.”

Congressional Democrats bristled at the pending rule. A group of 23 House Democrats wrote a letter to the OCC indicating that discrimination of the sort described by Brower and Lipsey is a necessary step toward creating a safer society.

“[T]he quantitative-only risk analysis that would be required by the [FAFSR],” the congressmen wrote, "discounts other material risks, including public safety, to the extent financial institutions voluntarily chose to adopt a decision-making framework intended to reduce gun violence when determining who and how they serve potential customers.

The delegation also noted that the proposed rule “would do nothing to ensure communities of color are better served by the banking system.”

The proposal drew the ire of leading officials in the banking industry, who contend that FAFSR poses an unnecessary burden to lenders. Greg Baer of the Bank Policy Institute, a group that represents several of the nation’s leading banks, wrote a letter to the OCC taking issue with the “sweeping practical implications of [FAFSR]” and “the faulty legal reasoning underpinning it.”

“Under [FAFSR], national banks could no longer consider the range of factors they have traditionally taken into account,” Baer wrote, “both in the context of applying their own sound risk management practices and meeting the OCC’s supervisory expectations, when deciding whether and how to provide a customer with financial services.”

It is unclear, however, whether the banks in question are merely applying “their own sound risk management practices” when they refuse to play ball with certain politically controversial borrowers. An OCC investigation revealed that, far from limiting their discrimination to the realm of lending, “certain banks ... were also terminating advisory and other services [to would-be Arctic drillers] that are unconnected to credit or operational risk.”

Hubbard of OCC emphasized that banks receive federal deposit insurance and are given “the privilege of a national license to operate,” a license that he claims imposes on banks certain obligations. Banks have a duty, Hubbard said, to provide proportionate access to financial services, even for clients involved in legal but politically controversial industries.