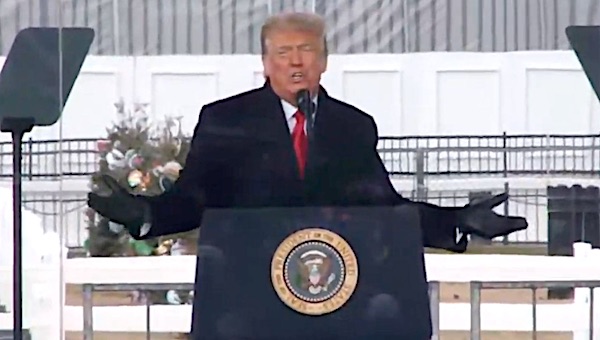 President Donald J. Trump addresses his remarks at the March to Save America in Washington, D.C., on Wednesday, Jan. 6, 2020 (Video screenshot)

Hours before a joint session of Congress on Wednesday to certify the 2020 election, President Trump told a massive gathering of supporters in front of the White House titled "Save America March" that his vice president has the power to correct what he believes was a fraudulent vote and give him another four years in office.

"If Mike Pence does the right thing we win the election," he said, referring to the vice president's role as the president of the Senate, presiding over the joint session.

"All Vice President Pence has to do is send it back to the states to recertify and we become president, and you are the happiest people," he said.

WATCH PRESIDENT TRUMP LIVE NOW at the "March to Save America" in Washington, D.C.

Trump argued that legislatures in some of the battleground states now want to decertify their Electoral College votes after having examined the evidence.

The president chastised Republicans such as Sen. Mitt Romney of Utah, who "want to be so nice" to everybody, including "bad people." 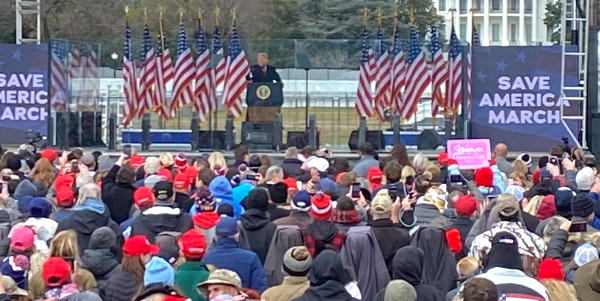 President Trump speaks to supporters ahead of the joint session of Congress Jan. 6, 2020, to certify the 2020 presidential election (Twitter photo Kelly O'Donnell)

He paused, finishing his sentence with emphasis on each word, "because you're sworn to uphold our Constitution."

"Now it is up to Congress to confront this egregious assault on our democracy," Trump said.

"And after this -- and I'll be there with you -- we're going to walk down ... to the Capitol, and we're going to cheer on our brave senators and Congress men and women," he said.

"And we're probably not going to be cheering so much for some of them," he added, "because you'll never take back our country with weakness. You have to show strength, you have to be strong."

He urged Congress to count only electors who were "lawfully slated." 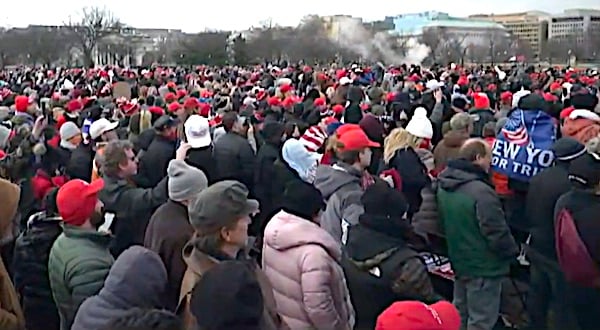 A large crowd listens as President Donald J. Trump addresses his remarks at the March to Save America in Washington, D.C., on Wednesday, Jan. 6, 2020 (Video screenshot)

More than 100 House Republicans and a dozen senators plan to object to certifying the vote in several battleground states, claiming there is enough evidence of irregularities and fraud to cast doubt on the outcome. An objection from at least one senator and one House member requires that each chamber engage in two hours of debate over each slate of electors to which they object. Critics of the objectors, including many fellow Republicans, contend the exercise is futile because each chamber must vote on the objections, and Democrats control the House.

Late last night, Trump said on Twitter many states "want to decertify the mistake they made in certifying incorrect & even fraudulent numbers in a process NOT approved by their State Legislatures (which it must be). Mike can send it back!"

The president and his supporters argue Pence has "plenary power," according to precedent (Thomas Jefferson and Richard Nixon asserted that power as vice presidents), to rule any objection as out of order, accepted, denied or entitled to more debate.

On Tuesday, Trump tweeted, "The vice president has the power to reject fraudulently chosen electors."

Hawley was the first to announce he will object, declaring on Twitter: "Somebody has to stand up. 74 million Americans are not going to be told their voices don't matter."

However, New York Post reporter Steven Nelson said via Twitter on Wednesday that Hawley told him at the Capitol that his aim is not to overturn the outcome.

"No, I don't think so. I think there's no votes for that, I mean, at all," the senator said, according to Nelson.

Rep. Jim Jordan, R-Ohio, told his colleagues on the House floor Tuesday that Democrats "don't care" about the evidence of fraud.

"They don't want to look into it," he said. "They'd rather just belittle 60 million of our fellow citizens, call them names, say it's a conspiracy, make fun of the very people we're all supposed to represent. Well, guess what? Tomorrow those people will get a chance to hear the truth."

Eight of the nine members of Pennsylvania's congressional delegation have stated they will object. Meanwhile, leaders of the commonwealth's Senate have sent a letter to McConnell and House Minority Leader Kevin McCarthy contending the Pennsylvania election results should not have been certified. They're asking for more time to hear the Trump campaign's lawsuit against the secretary of state, Kathy Boockvar.

The case for decertifying the election has been made by White House trade adviser Peter Navarro in two reports. In December, he released a report providing evidence of what he described as election "theft by a thousand cuts," titled "The Immaculate Deception." He identified six major dimensions of alleged election irregularities across six states: "outright voter fraud, ballot mishandling, contestable process fouls, Equal Protection Clause violations, voting machine irregularities and significant statistical anomalies." This week, he released a sequel, "The Art of the Steal," that documented what he described as a coordinated strategy.

CNN alerted its viewers ahead of Trump's speech with a chyron that read, "Soon: Trump to speak to supporters in desperate coup attempt."