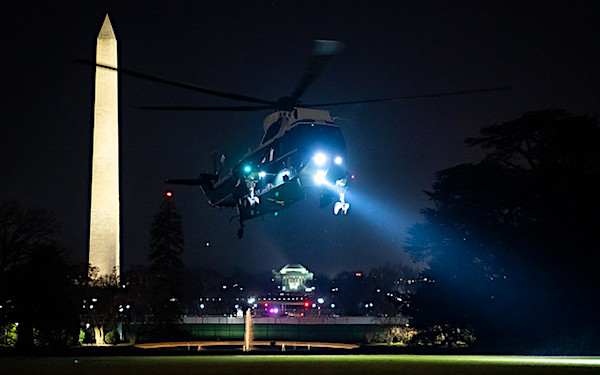 Marine One carrying President Donald J. Trump approaches for a landing on the South Lawn of the White House Tuesday, Jan. 12, 2021, following his trip to Texas. (Official White House photo by Tia Dufour)

Rasmussen Reports said the figures include 36% who said they strongly approve and 41% who strongly disapprove.

Trump's job performance numbers improved steadily after August 2017, reaching a total approval of 50% for April 2019, the pollster said. During the pandemic, his numbers dropped as low as 45% for June 2020. By comparison, President Obama's monthly approval ran from a high of 59% in February 2009, his first full month in the White House, to a low of 44% in August and October of 2011.

On Twitter, the polling company explained how its approach differs from polls by IBD, CNN, ABC/Washington Post, Pew and Morning Consult/Politico.

IBD, however, polls registered voters, instead of likely voters, and is weighted 40% Democrat, 30% Republican and 30% independent.

CNN polls "adults" and is weighted 33% Democrat, 26% Republican and 41% independent.

Rasmussen Reports also differs with its use of automated telephone polling techniques while other firms still utilize their operator-assisted technology.

Daily tracking results are collected via telephone surveys of 500 likely voters per night and reported on a three-day rolling average basis. To reach those who don't have a landline, Rasmussen Reports uses an online survey tool to interview randomly selected participants from a demographically diverse panel.