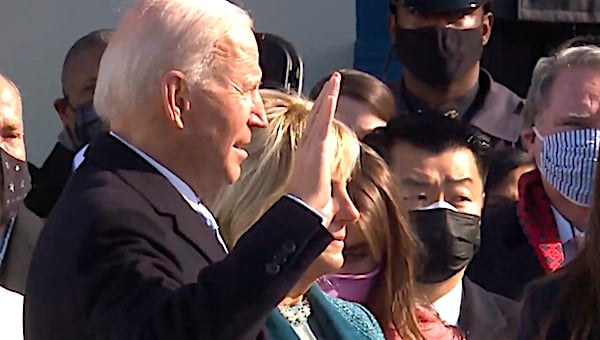 President Joe Biden takes the oath of office during his inauguration at the U.S. Capitol on Jan. 20, 2021. (Video screenshot)

The boss of a major union has complained that Joe Biden gave in to the "voices of fringe activists" when the president killed the Keystone XL pipeline, but it shouldn't have been a surprise, because the union endorsed the Democrat after he announced he would make the move.

Biden revoked the permit on his first day in office, drawing condemnation by the United Association of Union Plumbers and Pipefitters, known as the UA.

"In revoking this permit, the Biden Administration has chosen to listen to the voices of fringe activists instead of union members and the American consumer on Day 1," said UA President Mark McManus."

McManus argued that there's no issue with the environment, insisting that when "built with union labor by the men and women of the United Association, pipelines like Keystone XL remain the safest and most efficient modes of energy transportation in the world." Without the pipeline, the oil must be transported with trains that are subject to derailing.

As a result of Biden's order, thousands of union workers are out of work, and, for the average American family, "energy costs will go up and communities will no longer see the local investments that come with pipeline construction."

Ironically, noted PJ Media's Matt Margolis, McManus and the UA
endorsed Biden because the then-candidate supposedly had a reputation for standing with unions and creating jobs.

"This endorsement is about putting UA members to work and fighting for fair wages and good benefits. Under a Biden Administration, that's exactly what we'll get," said McManus at the time.

Biden, he said, "will be a fierce ally to our UA Brothers and Sisters in the White House."

But even more troubling, Margolis pointed out, is the fact that the union's endorsement came after Biden's campaign had already declared his intention to kill the pipeline if elected.

In a May 2020 statement, Biden policy director Stef Feldman said Biden "strongly opposed the Keystone pipeline in the last administration, stood alongside President Obama and Secretary Kerry to reject it in 2015."

Feldman said Biden would "proudly stand in the Roosevelt Room again as President and stop it for good by rescinding the Keystone XL pipeline permit."

'That's not how you treat a friend and ally'

Kenney noted that the U.S. is Canada's most important ally and trading partner. 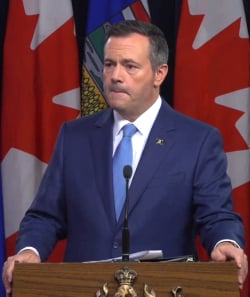 "That's not how you treat a friend and ally," the provincial leader said in a statement posted on Twitter.

Trudeau said that while Canada welcomes Biden's "commitment to fight climate change, we are disappointed but acknowledge the president's decision to fulfill his election campaign promise on Keystone XL."

At a news conference, Kenney called the move "a gut punch for the Canadian and Alberta economies."

"Sadly it is an insult directed at the United States' most important ally and trading partner," he said.

The United States is our most important ally & trading partner.

As friends & allies, we are deeply disturbed that one of @POTUS first actions was to rescind the Presidential permit for Keystone XL Pipeline border crossing.

That’s not how you treat a friend & ally.
My statement: pic.twitter.com/v2vRrs5vPn

Reuters reported the move "represents another set-back for the beleaguered Canadian oil industry, in particular its energy heartland Alberta, kills thousands of jobs, and marks an early bump in Biden’s relationship with Canada, a key trading partner."

The pipeline, owned by TC Energy Corp, is already under construction in Canada. It would carry 830,000 barrels per day of Alberta oil sands crude to Nebraska.

Legal challenges by U.S. landowners, Native American tribes and environmentalists have delayed the project for the past 12 years.

Christy Goldfuss, an energy and environment policy expert at the liberal Center for American Progress in Washington, argued, Reuters reported, that "the more we invest in fossil fuel infrastructure, the harder it is to transition to the investments we need to make for clean energy."

Tim McMillan, chief executive of the Canadian Association of Petroleum Producers, told the wire service Biden's action "is killing thousands of Canadian and American jobs at a time when both economies badly need private investment" and wiped out equity investment in the pipeline by Canadian indigenous groups.