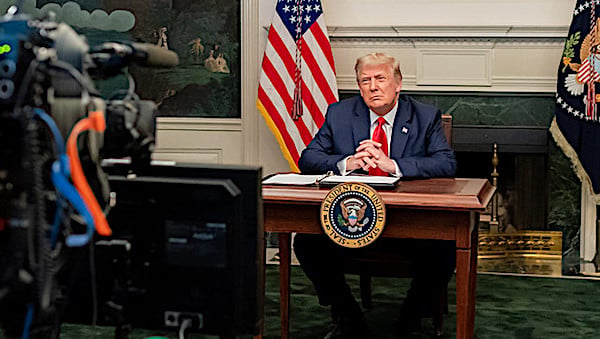 President Trump on Tuesday released a farewell to the nation via video, vowing that the movement to "Make America Great Again" is "only just beginning."

"As long as American people hold in their hearts the deep and devoted love of country, there's nothing this nation cannot achieve," said Trump.

He mentioned many of the hundreds of accomplishments the White House released in a list last week.

They included the "best economy ever," tax cuts, regulation reform, the abandonment of the "impossible" Paris climate deal and trade deals.

He praised the nation for defending itself from the "China virus," including the development of two vaccines in record time. He grieved for the lives lost to the coronavirus but called it a "medical miracle" for vaccines to be available five times faster than ever before.

Does Donald Trump have a chance at regaining the presidency with dark forces aligned against him?
79% (66 Votes)
21% (18 Votes)

He nominated three Supreme Court justices and nearly 300 federal judges to "interpret the Constitution as it is written."

Then there are the secure borders, the Middle East peace deals and an increase in respect for America abroad.

"Please don't lose that respect," he said to the incoming administration.

Other points were rebuilding the military, bringing American soldiers home and being the first administration in many years not to have gotten America involved in a new war.

And, he said, he put American people back in charge of the country.

In fact, many of Trump's successes have been ignored, and Joe Biden, through executive actions and legislation, plans a 10-day blitz as soon as he is inaugurated to eliminate Trump's legacy.

The list of Trump's accomplishments can be read here.