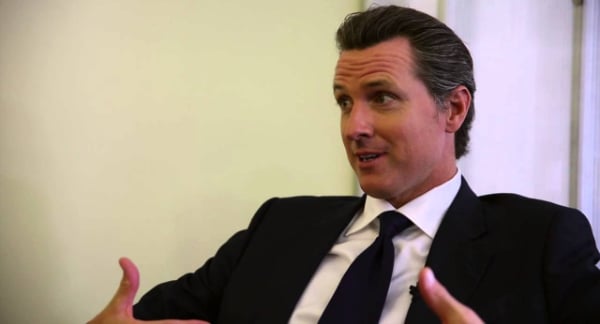 Democratic California Governor Gavin Newsom is less than 100,000 signatures away as of Thursday from being forced into a recall special election.

.@GavinNewsom doesn’t want to talk about the recall. But his allies can’t ignore it. The nascent counter-campaign ramping up:https://t.co/eF7sf3J3nG

The recall milestone comes amidst Newsom’s poll numbers hitting historic lows in response to the governor’s controversial COVID-19 policies, according to a report from Politico.

The report indicated only 46% of Californians approve of Newsom’s performance as governor, down from nearly two-thirds back in November of last year.

Similarly, only 45% of voters indicated they would vote to retain Newsom in the event of a recall, with 36% of respondents saying they supported a recall and 20% saying they are undecided, according to the report.

The sheer momentum of the recall effort has left many in Newsom’s inner circle on edge.

The Recall Gavin Newsom 2020 movement has steadily gathered no less than 100,000 signatures a week within the last month. If this pattern holds, the movement is almost guaranteed to meet the minimum number of required signatures to force a recall as early as next week.

60% of recalls result in the successful removal of the targeted office holder, according to political analyst Joshua Spivak in a recent report by the LA Times. However, Newsom is not guaranteed to be successfully recalled, especially given California’s political demography.

“In short, the math favors the effort to qualify for the ballot, but the base of Republicans (24%) or Trump voters (34%) falls well short of the majority needed to remove and replace the governor,” said PPIC Polling President Mark Baldassare in a statement to Politico.

The recall movement has until March 17th to submit the remaining 100,00o signatures needed to force a recall special election.

WND News Services
These reports are produced by another news agency, and the editors of WND believe you'll find it of interest.
'I couldn't pretend any more': Former Christians on why they left faith
'It's unimaginable': Mom of 5 dies after pouring gasoline on firepit in backyard tragedy
Music legend shocks fans by performing at Broadway opening years after retiring
Ukraine's Jewish president Zelensky named Time's Person of the Year
'Liberal religion' is 'darkness' that must be expelled, says Netanyahu ally
See more...