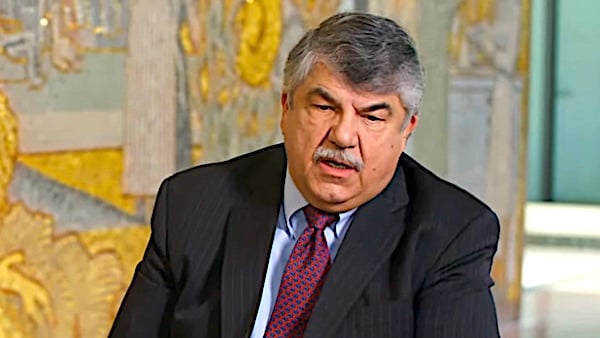 The head of a powerful federation of labor unions appeared uncomfortable during an interview when asked about President Joe Biden’s executive actions killing union jobs.

“Well, I wish he hadn’t done that on the first day,” Trumka said after Swan asked about the pipeline. “Because the Laborer’s International was right, it did and will cost us jobs in the process.”

On the campaign trail, Biden was explicit about his intention to end the Keystone Pipeline and ban new oil and gas leasing and drilling permits on federal lands. Trumka still endorsed Biden, calling him a “lifelong supporter of workers.”

Trumka added Sunday that he wished Biden had paired the pipeline action with an action creating jobs, according to Axios. The Biden Administration has defended ending the pipeline’s construction, saying there will be millions of future “green” jobs created from future legislation.

But, there are no renewable energy jobs that come close to “replacing the wages and benefits the Keystone XL project would have provided,” according to LiUNA’s O’Sullivan. In addition, Trumka said laying off 100 workers in one area of the country while hiring 100 in another area doesn’t do the original 100 “much good.”

The AFL-CIO president said Biden realizes revoking the Keystone permit was a mistake, but wouldn’t say if he has spoken to Biden about it.

Trumka was also visibly uneasy when Swan asked about the Biden administration’s suspension of new oil and gas leasing and drilling permits. He insisted that the action must be carefully studied and thought through.

The U.S. gross domestic product would decline by a cumulative $700 billion through 2030 if the government banned leasing on natural gas and oil development on public lands, according to a recent American Petroleum Institute (API) study. Nearly a million jobs would be lost by 2022 with Texas alone losing 120,000.

“Banning federal leasing and development on federal lands and waters would derail decades of U.S. energy progress and return us to the days of relying on foreign energy sources hostile to American interests,” API President and CEO Mike Sommers said in a statement.