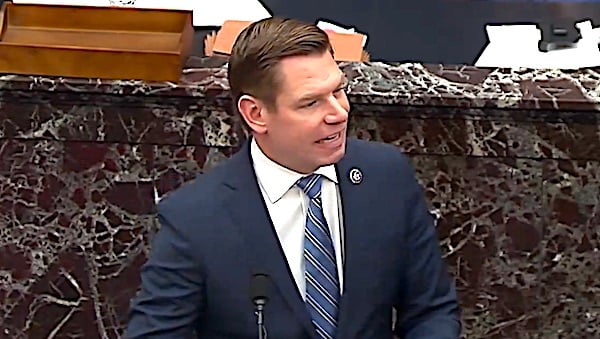 The American Center for Law and Justice is suing the federal government to obtain information about Democratic Rep. Eric Swalwell's ties to a Chinese spy.

Lawsuits already have been filed against the National Security Agency, the office of the director of national intelligence and the State Department. And preparations are under way to bring the FBI into court.

"President Biden’s Deep State agencies are already refusing to cooperate with us to expose government corruption, even with our national security at risk," the ACLJ said.

"We’ve spent years warning you about the Deep State’s shredding of the Constitution. The actions of Deep State operatives have placed the safety and security of Americans in jeopardy. And now under President Joe Biden, the Deep State bureaucracy is being further empowered – even reinvigorated – to undermine everything we’ve fought for."

Swalwell was a House manager in both of the impeachment trials against Trump.

He was found to have had a direct connection with a Chinese communist spy at about the time he was named as a member of the House Intelligence Committee.

House Speaker Nancy Pelosi admitted she was aware of the relationship but said she has "no concerns" about it.

"We have many concerns, as should the speaker and every other elected official," the ACLJ said. That's why it filed four Freedom of Information Act requests with the FBI, State, NSA and others demanding any and all documents about the connection between Swalwell and Fang.

"Rep. Swalwell’s association with this Chinese national may have placed the security of America at risk. That should alarm anyone, regardless of their political party," the organization argued.

The lawsuits followed the refusal of the government agencies to respond to the FOIA requests.

Fox News reported Republican House Leader Kevin McCarthy, after an FBI briefing, said it was clear that Swalwell should not have access to the nation's secrets, as he does as a member of the House Intelligence Committee.

"Remember it was Rep. Swalwell who accused President Trump of betraying our country and of being a Russian agent, telling the mainstream media: 'Donald Trump works on Russia's behalf.' Rep. Swalwell also accused the President’s son, Donald Trump, Jr., of meeting with a Russian spy. Now we see this was a pot-calling-the-kettle-black moment; except in this instance, there is direct evidence of Rep. Swalwell’s misdeeds, as opposed to the Special Counsel’s finding that there was no evidence of collusion between the Trump campaign and Russia," the ACLJ said.