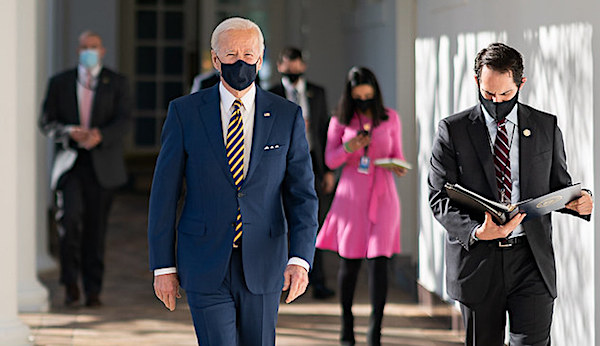 President Joe Biden walks with his personal aide Stephen Goepfert along the Colonnade Friday, Jan. 22, 2021, to a briefing on the economy in the State Dining Room of the White House. (Official White House photo by Adam Schultz)

President Biden’s executive orders have received much media attention. Killing 11,000 jobs on the Keystone Pipeline, opening the U.S. borders to unlimited illegal crossings, allowing biological boys to compete in girls’ sports – it’s a progressive dream, without even a drop of pesky congressional debate. One order that didn’t get the attention it deserved is the president’s decision to rejoin the Paris Climate Agreement. The fallout from this move is much greater than most people realize.

On the campaign trail, Biden pledged to cut all greenhouse gas emissions from America’s electricity sector by 2035 and make the country carbon-neutral by 2050. He is framing America’s reentry into the climate accords as a crucial first step toward achieving these goals. The reality is different. Senator Ted Cruz more accurately frames the situation: “By signing this order, President Biden indicates that he’s more interested in the views of the citizens of Paris than in the jobs of the citizens of Pittsburgh.”

It may be even more accurate, and more ominous, to say that Biden is favoring Beijing over Bakersfield. The Covid-19 pandemic has already taken a heavy toll on America’s oil refineries.

Late last year, the International Energy Agency reported that about a dozen refinery closures had been announced in the past few months, with the bulk of capacity closures – over 1 million barrels per day – happening in the U.S. These closures are resulting in massive job losses, made even worse by the nature of refining jobs, which have a 10x–25x multiplier effect. So the net loss of 3,500 jobs translates into the loss of at least 35,000 jobs.

President Biden should be supporting a major industry that employs millions of Americans and generates billions of dollars in revenue. Instead, he is weakening this industry, to the benefit of our greatest international adversary.

Energy experts believe that China will outpace America in refining capabilities this year, for multiple reasons. The communist state bolsters the oil industry to artificially drive down costs, as it does with other industries, such as manufacturing. This policy attracts foreign business. Crude, even American crude, will inevitably become cheaper to send to China to refine, returning to us as gas, propane, jet fuel, or other products. If you find it hard to believe that it could be cheaper for our American oil to be refined thousands of miles across the ocean than to be refined here at home, take a look at where most of the goods in your house are made. Oil is no different than TVs or clothes or furniture when it comes to China’s aggressive actions to dominate the market.

There’s another reason why refining in China will be cheaper. There’s no Michael Bloomberg-funded Sierra Club filing lawsuits against the industry. There are no phony pipeline “protesters” blocking construction. There’s no Environmental Protection Agency, no OSHA, no child labor laws, no labor unions threatening strikes, no government program offering subsidies to your “green” competition. Greta Thunberg, noted child environmental activist, hasn’t made it to China, though China is the world’s largest polluter. Why? Because she knows that she’d be arrested and put into a camp, along with the paid-for protesters.

Joe Biden’s decision to rejoin Paris isn’t good for America or the cause of global climate change. It’s good for China – great for China, in fact. Hua Chunying, spokeswoman for China’s foreign ministry, said that China “looks forward” to the return of the U.S. to the international agreement, from which China itself has abstained.

There is optimism regarding an oil-demand recovery this year, as Covid-19-related travel restrictions ease. But if Biden continues to let refineries close, the U.S. may not have enough domestic capacity to serve our own needs. This will translate to an increased reliance on foreign fuels – a reliance that we only recently liberated ourselves from, after decades of effort.

Allowing China to control the energy supply chain is a national security risk. We got a taste of it in the wake of Covid-19, when we realized that Beijing controlled our medical supplies. If we lose our edge in refining, then we become further dependent on China. Do we really trust that the Chinese will send back refined products in a timely and fair manner, or might they hold cargo ships at port just long enough to strengthen their hand in negotiations?

Let’s not forget that at the beginning of the pandemic, Chinese officials saw their dominance of the medical industry as leverage. A country willing to withhold medicine at a time of sickness won’t hesitate to withhold oil and gas at their convenience.

On the campaign trail, Biden mocked former President Trump’s relentless opposition to the Chinese threat. “China’s gonna eat our lunch? Come on, man,” he said. It’s actually worse than that. If our lunch is imported from China, it’s theirs to begin with, man, and we’re just making it worse by rejoining Paris. We’re making it impossible to do business in America and shifting industries to China. Beijing gets the jobs, the tax revenue, and dominance over us.

At this rate, we’ll go from American energy independence to Chinese energy dominance in four years.