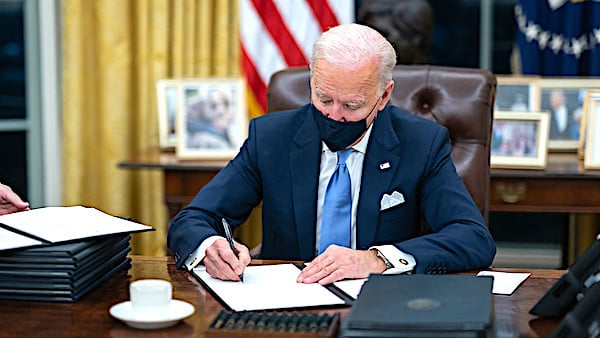 President Joe Biden signs one of the 17 Executive Orders he signed on Inauguration Day Wednesday, Jan. 20, 2021, in the Oval Office of the White House. (Official White House photo by Adam Schultz)

As President Biden prepares to unveil an immigration plan, he is recommiting himself to granting amnesty to nearly every illegal alien in the United States, which number up to 22 million, according to some estimates.

At a CNN town hall event Tuesday night, Anderson Cooper asked Biden if it would be "essential" for any immigration bill to have "a pathway to citizenship."

Biden explained that he might deal with other issues in separate bills, such as refugees, but "not at the expense of saying I'm never going to do the other."

"There is a reasonable path to citizenship," he said.

Titled U.S. Citizenship Act of 2021, Biden's bill likely will be unveiled by the end of the week.

Along with a fast-track to American citizenship, the plan calls for a 700% increase in the refugee resettlement program, reinstatement of the Central American Minors program, work permits for the family members of H-1B and H-2B visa holders, more employment-based and chain migration visas, a fast-track to the U.S. for Central American family members of citizens and an expansion of the Diversity Visa Lottery program.

The House previously passed a bill that would grant legal status to thousands of illegal-alien farmworkers. And a separate bill was approved that addresses beneficiaries of the Obama administration's Deferred Action for Childhood Arrivals (DACA) program and two other programs offering temporary relief, Temporary Protected Status and Deferred Enforced Departure, CNN reported.

Democratic Rep. Linda Sanchez of California said in a statement that Biden has "put forth his vision for robust immigration reform. Now, it's up to Congress to deliver."

"With a Democratic majority in both Chambers, and an overwhelming majority of the public on our side -- as well as a number of legislative tools at our disposal -- I believe we will be successful in finally securing permanent solutions," she said.

Sen. Bob Menendez, D-N.J., is taking the lead in the Senate.

However, a previous Republican supporter of amnesty, Sen Lindsey Graham of South Carolina, thinks a blanket amnesty has little chance of passing the upper chamber.

"I think probably the space in a 50-50 Senate would be some kind of DACA deal," Graham said, NBC News reported. "Comprehensive immigration is going to be a tough sell given this environment, but doing DACA, I think, is possible."

Biden began rolling back Trump administration immigration restrictions on his first day in office, including pausing removals for 100 days of people scheduled for deportation.

Among six immigration-related executive orders, Biden also stopped construction of the border wall and reinstated the DACA program enacted by Obama through an executive order widely regarded as unconstitutional.

When the @JoeBiden admin breaks the law, I take action. I have told @DHSgov to immediately rescind its illegal, unconscionable deportation freeze—or TX will sue.

As AG, I will always put Americans, Texans first—not dangerous aliens who must be deported!https://t.co/anW89QJiPP pic.twitter.com/ehsucOe6Ks

The DHS said in a statement that the "pause will allow DHS to ensure that its resources are dedicated to responding to the most pressing challenges that the United States faces, including immediate operational challenges at the southwest border in the midst of the most serious global public health crisis in a century."

"Throughout this interim period DHS will continue to enforce our immigration laws," the agency said.

Paxton argued in his letter to Pekoske that the administration is required to consult with the state before reducing immigration enforcement measures.