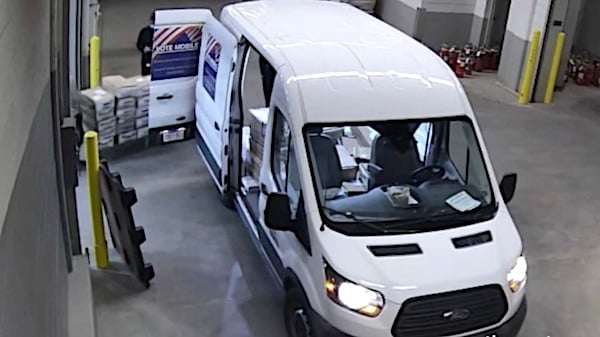 A white van appears to deliver ballots at Detroit's TCF Center hours after the deadline on Election Night in November 2020. (Video screenshot)

CORRECTION Feb. 9, 2021 at 10:11 p.m. ET: A fact-check by LeadStories on the Gateway Pundit video on which this story is based found that "while the article may very well be correct in identifying the objects taken from the van as ballots, it is not correct in asserting that those ballots were illegal. They were legal votes that had been cast before the 8 p.m. Election Day deadline. Note that the deadline is for casting votes not counting them. Absentee ballots can arrive at counting boards, such as the TCF Center, after 8 p.m. on Election Day.

"Lead Stories reached out to the secretary of state's office in Michigan to ask about the article's claims. A spokeswoman wrote back that what took place was 'standard and appropriate practice.' She pointed us to the office's website, which offers the following explanation:

"'In many larger jurisdictions, absentee ballots that arrived on Election Day were marked as received and put through security checks at clerk offices prior to being brought to absent voter counting boards. If a ballot arrived at a clerk's office at 8 p.m., it may not move through the process and be sent to the counting board for several hours. This is why, in cities including Detroit, ballots arrived at counting boards several hours after polling places had closed.'"

The headline of the WND article has thus been updated from "Election-night mystery: Film shows van delivering ballots after deadline" to "What's the story on the election-night 'after-hours' ballots?"

A video released by the Gateway Pundit allegedly shows a white van delivering dozens of boxes of ballots to be counted in Detroit's TCF Center hours after the deadline on election night in November.

At 3:23 a.m. on Nov. 4, the blog said, a white van registered to the city of Detroit entered the center. Two minutes later, three people were seen unloading more 50 boxes of ballots "just outside the counting room."

"The ballots were then wheeled away on carts into the ballot counting room," the publication reported, and the van left.

But an hour later, it was back, with more boxes of ballots.

The deliveries happened at the same time Joe Biden's vote totals suddenly surged in the state.

It's a pattern that's been reported in several of the swing states that ultimately decided the 2020 presidential race. In Georgia, for example, a surveillance video showed election workers sent Republican observers home then wheeled out suitcases full of ballots from beneath a table and counted them.

Trump was ahead of Biden by more than 100,000 votes before the van deliveries.

"At least three election observers later testified in sworn affidavits that they witnessed vehicles delivering fraudulent ballots to the TCF Center early in the morning on November 4th," the report said.

"There were thousands of ballots in each box," Trejo said. "There were at least 50 boxes that I saw unloaded at 3:30 am, well after the 8:00 pm deadline for ballots to show up."

It was shortly after the deliveries that Biden gained the lead, the report said.

"Trejo explained how the timing was important. The Biden Ballot Drop took place at the end of one shift. The ballots were left uncounted. So when the new shift came to count ballots they didn’t know where the ballots had come from," the report said.

"Former Michigan State Senator Pat Colbeck was also present at the TCF Center on the morning of November 4th. Senator Colbeck also witnessed the 3:30 am Biden Ballot Drop. Colbeck spoke with The Gateway Pundit back in November, 'I went back there and I witnessed a mini-panel truck if you will with a Detroit Election Bureau regalia all over the side and a vehicle ID number on it… And inside of it, and this gets into some chain of custody discussions, there was no indication that there was a Republican and a Democrat (present) during transfer. We don’t know if they stopped by a sidestreet in Coney Island and picked up a few more ballots during transfer. We have no way of verifying any of that information,'" the report said.

The report noted that Chris Thomas, a Detroit city official, admitted in an affidavit that 41 boxes of ballots were delivered in the middle of the night

The ballots, the report said, arrived "without the proper chain of custody documentation" and should have been disqualified.