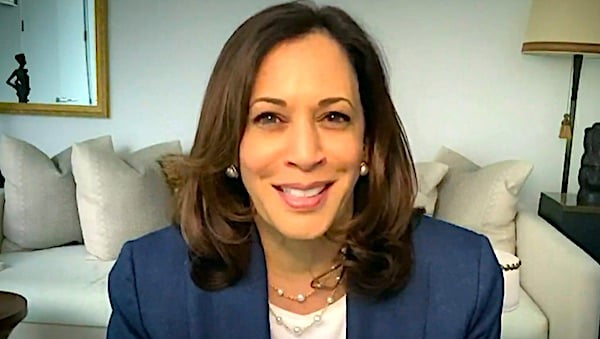 As Senate Democrats prepare to try former President Trump on a charge that he "incited" the Jan. 6 riot at the U.S. Capitol, remarks by Vice President Kamala Harris a few years ago are making the rounds.

It's when she joked about killing Trump, Vice President Mike Pence and Attorney General Jeff Sessions.

Republicans have pointed out that many Democrats have engaged in political rhetoric that could be perceived as threatening, citing Harris' remarks in 2018 as among the most egregious.

Kamala Harris joked about killing Trump, Pence and Sessions with Ellen in 2018.

Harris was asked by Ellen Degeneres, "If you had to be stuck in an elevator with either President Trump, Mike Pence, or Jeff Sessions, who would it be?"

“Does one of us have to come out alive?” Harris replied with a smirk.

She then laughed uproariously for at least 10 seconds.

PJ Media's Matt Margolisi observed that it "seems appropriate to point out instances where Democrats have used violent rhetoric and demand equal justice for it."

Margolis recalled that last summer, Harris "also even gleefully predicted that the BLM protests, during which rioting, looting, and murder occurred, wouldn’t end."

She told Stephen Colbert, host of "The Late Show," that the rioting will not end.