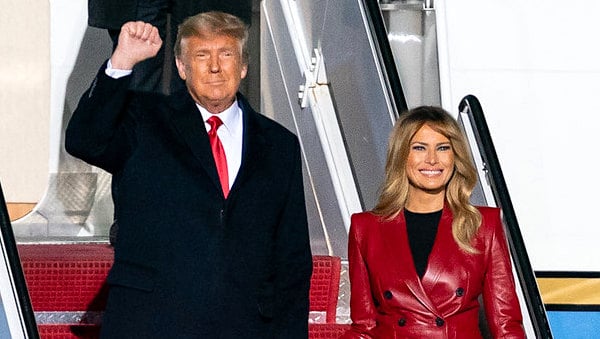 President Donald J. Trump and First Lady Melania Trump are escorted from Marine One to Air Force One at Joint Base Andrews, Maryland on Saturday, Dec. 5, 2020. (Official White House photo by Andrea Hanks)

With Joe Biden in the White House, the mullah-led Iranian regime is pressuring the U.S. to provide "compensation" for the "damage" from sanctions imposed by the Trump administration.

Iran also wants to leverage its nuclear accomplishments and gain additional ones, according to the Middle East Media Research Institute.

MEMRI sai Iran wants to be "recognized as a nuclear threshold state with the ability to produce a nuclear bomb within a short time, in order to move towards a nuclear balance of terror in the Middle East, to block European initiatives to include the issue of Iran's ballistic missile development and its expansion in the region in a new agreement, and to ensure the continued existence of the Iranian regime."

MEMRI noted the regime has been violating the 2015 Iran nuclear deal by enriching uranium to a high level and expelling International Atomic Energy Agency inspectors.

Iran also is demonstrating, through the launch of ballistic missiles, its ability to make long-range rockets, and it is conducting shows of conventional military strength.

It further attacked U.S. targets in Iraq using Shiite militias, and Saudi and Gulf targets using Yemeni Houthi militia. Tehran also is pressuring the Taliban in Afghanistan to destroy the peace agreement it reached with the Trump administration.

"It should be emphasized that Iran's nuclear program is the Iranian regime's national project, and that all political streams – ideologues, Iran's Islamic Revolutionary Guard Corps (IRGC), the government of President Hassan Rouhani and Foreign Minister Mohammad Javad Zarif – are fully on board with it," the report said.

"The Iranian regime assesses that it can force the Biden administration to agree to upgrade Iran's nuclear status. That is to say, the Obama administration recognized Iran's right to enrich uranium with a full nuclear fuel cycle, and now the Biden administration can be led to consent to a nuclear balance of terror in the Middle East, as part of which Iran will have nuclear weapons for 'defensive purposes,'" said MEMRI.

The report noted Biden's intends to return to the Iran nuclear deal from which Trump withdrew, and it's reasonable to assume that Biden-Iran contacts already are under way.

Supreme Leader Ali Khamenei has authorized the renewal of talks with the Biden administration. In in a speech on Jan. 8 in which he set out the outline of the negotiations and Iran's demands, he said: "The Western front and our enemies must end this cruel move – meaning the sanctions on the Iranian nation – and stop this immediately. They are required to lift all the sanctions... Of course, I have said this many times, and I will reiterate: They [the West] must lift the sanctions..."

The ayatollah said that if the U.S. returns to the Iran deal, "the issue of the damages [caused of the damages caused by the sanctions and the reparations] are part of our demands, and [those in charge in the regime] will be following up on this [issue] in later phases."

President Rouhani said that if the "new members of the White House have learned any lessons from the previous administration, they will make up for [Trump's] mistakes."

"The previous president built skyscrapers and did not understand politics. But the new American administration understands politics and has political experience. ... The ball is in the court of the U.S. and Washington. If they fulfil their obligations, we will too. Trump is dead, but the JCPOA is still alive."

Iran's strategy apparently will be to leave the nuclear deal unchanged while demaning the removal of all sanctions and American reparations, MEMRI said.