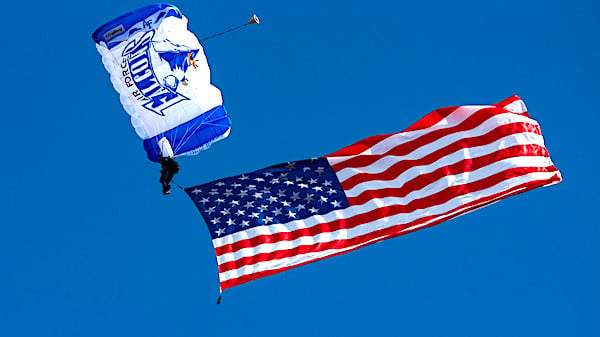 A member of the U.S. Air Force Academy "Wings of Blue" parachute team descends from the sky during the "Wings over Warren" air show at F.E. Warren Air Force Base, Wyoming, July 22, 2020. (U.S. Air Force photo by Capt. Kip Sumner)

The National Basketball Association has told mercurial Dallas Mavericks owner Mark Cuban to restore the Star-Spangled Banner to pre-game activities after halting the anthem because it does not "represent people from all communities."

JUST IN: NBA announces that all teams are required to play the national anthem, following Dallas Mavericks owner Mark Cuban's announcement that the team would stop playing the anthem. pic.twitter.com/IzorRckbCU

The Mavericks had not announced the policy, but the national anthem has not been played before any of the teams 13 preseason and regular-season games this season.

ESPN noted that league rules require players to stand during the anthem.

But NBA officials have refused to enforce the rule, and kneeling has become popular to protest alleged systemic racism. Cuban previously expressed support for such "social justice" campaigning in the NBA.

In June, Cuban told ESPN: "Whether it's holding their arm up in the air, whether it's taking a knee, whatever it is, I don't think this is an issue of respect or disrespect to the flag or to the anthem or to our country. I think this is more a reflection of our players' commitment to this country and the fact that it's so important to them that they're willing to say what's in their heart and do what they think is right." 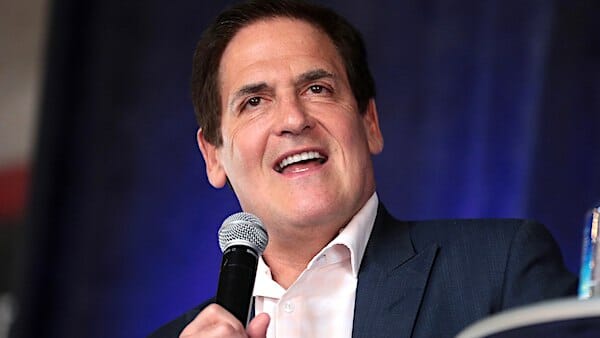 Cuban said he expected players to stand, but explained he changed his mind because he "evolved."

DailyMail.com reported NBA spokesman Mike Bass said in a statement that with NBA teams "now in the process of welcoming fans back into their arenas, all teams will play the national anthem in keeping with longstanding league policy."

Cuban replied, "We are good with it."

Mavericks owner Mark Cuban to @NYTSports on the league's decision to mandate the playing of the national anthem before games: "We are good with it."

When Cuban announced the censorship of the anthem, Dallas County Republican Party communications director William Busby told DailyMail.com: "I'd certainly encourage Republicans that attend [Mavericks games] to really consider what they're spending money on. I'm not a fan of official boycotts myself, nor would the party support an official boycott. However, the party does support free-market solutions and people speak with their pocketbooks."

At the White House on Wednesday, spokeswoman Jen Psaki dodged a question about the issue.

DailyMail.com noted Cuban is an investor thought to be worth $4.3 billion.

Media personality Megyn Kelly suggested: "Fans who still choose to attend should put their hands on their hearts and just start singing it. Now that would be a moment."

Fans who still choose to attend should put their hands on their hearts and just start singing it. Now that would be a moment. https://t.co/TY6Ccl6zIs

Twitter user Zach Roach wrote: "Thank you @NBA for stepping up and issuing a statement that all teams must play the national anthem! Now fire and ban Mark Cuban."