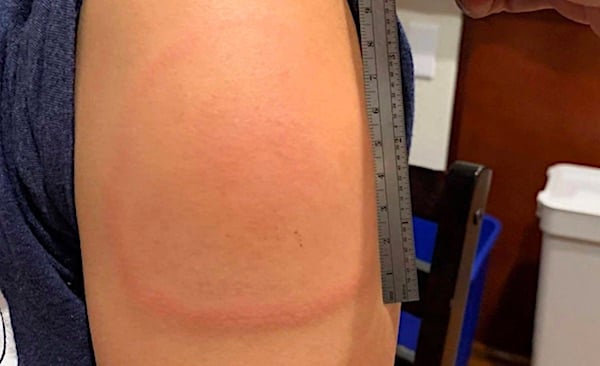 The side effects of COVID-19 vaccinations already have been documented to include a sore arm at the point of the shot, feeling tired, headache, feeling achy, feeling sick, but they are expected not to last more than a week.

But now there's a new one: COVID arm.

It's caused by Moderna's vaccine, and The Sun reports it appears around a week after getting a shot.

Doctors say it only affects a few patients. And, the Sun said, physicians insist that people who do get it still should get the second dose.

"We want to reassure people that [COVID arm] is a known phenomenon," explained Dr. Esther Freedom, of Massachusetts General.

"Having a big red splotch on your arm for a couple of days may not be fun but the reality is there's no need to panic and no reason not to get your second shot."

The vaccine, predicted by some to be 95% effective, is being used in the United States already but not yet in the United Kingdom.

It's similar to the mRNA tech that is used in the Pfizer medicine.

One who experienced the complication, Amelia Brown of Visalia, California, said it blew up overnight "from like, a dollar size to like, a baseball size."

"And it was very swollen, hot to the touch, sore, even if I wore my coat that day, the pressure of the coat was painful," she said.

She had had minor symptoms after her shot, feeling dizzy, she explained to Fox.

But by a week after, her arm was "just red and angry and had hives."

Dr. Praveen Buddiga, an immunologist, advised her, "Your immune response is responding and in some cases, some patients have a very hyper or really aggressive immune response."

Britain's National Health Service warns consumers to let healthcare workers know – before a vaccination – if they've had serious reactions to other shots.

On expert explained in the report, "'COVID arm' is basically a delayed type of hypersensitivity or an allergic reaction that occurs about probably seven to 10 days afterward."

Doctors say it appears in 2-9% of patients.

The concerns about the unusual side effect come after "reports of another unusual and very rare Moderna side effect in people who have had facial fillers," the Sun said.

"Those with fillers in their cheeks and lips ended up with swelling and inflammation but were treated with antihistamines or steroids, it was reported in December."