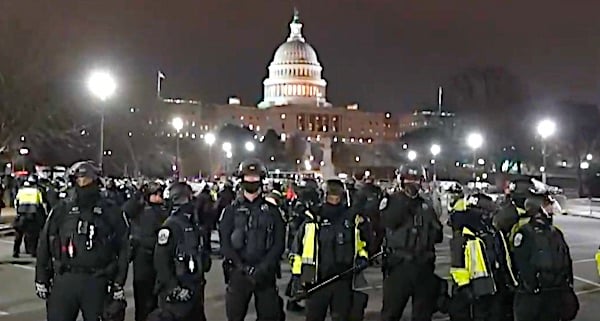 Many questions remain unanswered about the death of Officer Brian Sicknick after the Jan. 6 riot at the U.S. Capitol.

The New York Times ran the headline, "He dreamed of being a police officer, then was killed by a pro-Trump mob," claiming in its report that  Trump supporters killed him with a fire extinguisher.

But CNN reported last week that investigators "are struggling to build a federal murder case … vexed by a lack of evidence that could prove someone caused his death."

Authorities, the network said, "have yet to identify a moment in which he suffered his fatal injuries."

Revolver News noted the stakes are high as Sicknick's death is the only purported death by a largely tourist crowd that was let into the building by police, stayed inside the velvet ropes, and seemed at least partly there out of confusion, for social media clout or just for the memes.

Even the New York Times conceded the property damage was limited.

"That’s a far cry from murder," Revolver News said. "Yet MAGA is being blood libeled with a felony murder charge in the court of public opinion and at Donald Trump’s impeachment, while potentially exculpatory evidence is silenced or sealed. As the Washington Uniparty mulls domestic terror laws over a MAGA Bloodbath, it increasingly looks like MAGA may have been Bloodbathed. Time is of the essence for the Feds to release all evidence, damn the guilty, or the clear the MAGA movement of these serious allegations."

The blog Ammoland noted that all that is actually known "is he died after going back to the office, from what appears to be a stroke resulting from a blood clot."

"This coincides with what his family said just days after his death, indicating that they believed he may have died from a medical condition."

Ammoland noted most media outlets say Sicknick "was killed because of being beaten with a fire extinguisher by a Trump supporter."

DailyMail.com reported Capitol Police said in a statement that Sicknick was injured "while physically engaging with protesters."

"During the struggle, Sicknick, 42, was hit in the head with a fire extinguisher, two law enforcement officials said. The officials could not discuss the ongoing investigation publicly and spoke to The Associated press on condition of anonymity."

However, Revolver News noted,  after the riot, Sicknick had told his brother, Ken, he was fine except for being pepper sprayed.

The Sicknick family, the next day, started getting calls from reporters that Brian had died, even though he had not.

Skeptics are calling for a release of an autopsy or findings from the Washington medical examiner. They note the officer's body was quickly cremated and there has been no information confirming a cause of death.