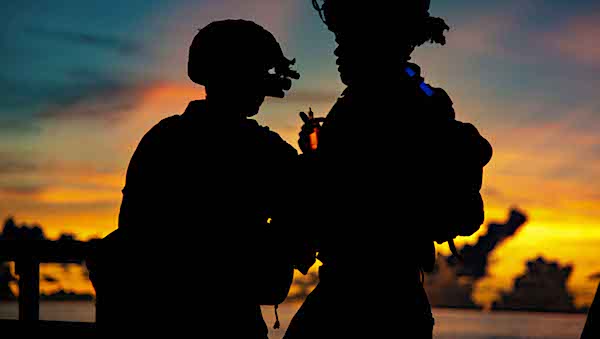 The Pentagon has admitted it's unsure how to address the problem or even how serious it is, but the newly confirmed secretary of defense has ordered a stand-down with the ultimate objective of removing white nationalists from the ranks.

Lloyd Austin, the first black defense secretary, emphasized in his confirmation hearing Wednesday the need to rid the military of "racists and extremists."

He didn't say how long the stand-downs pausing military activity would last or how commanders would address the issue.

Pentagon spokesman John Kirby said military leaders must show progress in combating extremism after current and former military servicemembers were found to have participated in the siege of the U.S. Capitol on Jan. 6, Reuters reported.

The wire service noted, however, that the Pentagon has not said how it will deal with extremism and has not presented data estimating how many service members hold white nationalist ideology.

Today, I met with senior leaders to discuss extremism in the military. As a first step, I'm ordering a stand down to occur over the next 60 days so each service, each command and each unit can have a deeper conversation about this issue. It comes down to leadership. Everyone’s. pic.twitter.com/wbC21hdHaV

Last week, without specifying any threat, the Department of Homeland Security issued a national terrorism bulletin warning that the Capitol riot may embolden extremists to stage additional attacks against the government.

The DHS said there's "a heightened threat environment across the United States" that "will persist" in the wake of Joe Biden's inauguration Jan. 20.

"Information suggests that some ideologically-motivated violent extremists with objections to the exercise of governmental authority and the presidential transition, as well as other perceived grievances fueled by false narratives, could continue to mobilize to incite or commit violence," said the bulletin, which was issued by acting Homeland Security Secretary David Pekoske.

There was no mention of any ideological or political affiliation, but the DHS said individuals "could continue to mobilize a broad range of ideologically-motivated actors to incite or commit violence."

The AP said the bulletin, issued through the department's National Terrorism Advisory System, is "notable because it effectively places the Biden administration into the politically charged debate over how to describe or characterize acts motivated by political ideology and suggests that it sees violence aimed at overturning the election as akin to terrorism."

House Democrats have introduced a bill on domestic terrorism that is aimed at conservatives, warns former Rep. Tulsi Gabbard, D-Hawaii,

Introduced by Rep. Adam Schiff, D-Calif., the Domestic Terrorism Prevention Act of 2021 would undermine constitutional rights of "almost half of the country," she said in an interview with Fox News host Brian Kilmeade.

"We don't have to guess about where this goes or how this ends," said Gabbard, who now serves as an Army Reserve civil affairs officer at a base in California.

Gabbard, who distinguished herself in the 2020 primary by criticizing some of the far-left views of her opponents, noted the recent remarks of former CIA Director John Brennan in an MSNBC interview.

Brennan said the Biden team was "moving in laser-light fashion" to uncover "insurgency" movements that are part of an "unholy alliance" of "religious extremists, authoritarians, fascists, bigots, racists, nativists, even libertarians."

He said "law enforcement, homeland security, intelligence and even the defense officials are doing everything possible to root out what seems to be a very, very serious and insidious threat to our democracy and our republic."

Gabbard told Fox News that the problem will come into focus as the Biden administration builds its profile of a potential extremist.

Gabbard continued: "You start looking at, OK, well, obviously you have to be a white person, obviously likely male. Libertarians. Well, anybody who loves freedom, liberty, maybe has an American flag their house or people who, you know, attended a Trump rally."

She said that "once you start walking this down the path, you see where it leads to a very dangerous undermining of our civil liberties, our freedoms in our Constitution, and a targeting of almost half of the country."

Kilmeade asked Gabbard if she thought the Democrats' talk about "deprogramming" Trump supporters relates to the domestic terrorism effort.

"I think it does, very directly," the congresswoman replied.

“This whole effort, whether you’re talking about this bill or people saying that we have to deprogram these Trump cultists and people who voted for Trump because they’ve been radicalized, all of this just goes to further tear our country apart,” Gabbard warned.