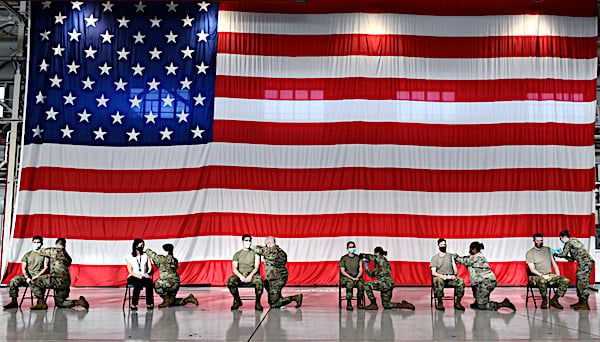 A fact-checker’s role is to help readers distinguish fact from fiction by analyzing and rating claims. Sometimes, however, fact-checkers seem to create and check claims that no one is making, or, perhaps inadvertently, blame outlets or individuals for false claims that they didn’t make.

In a fact-check published Jan. 5, Snopes contributor Madison Dapcevich analyzed the claim “Legislation proposed in the New York State Senate in 2021 called for the establishment of COVID-19 ‘detention camps,’” rating this a “Mixture” of truth and falsehood.

In reality, Dapcevich writes, New York State Assembly Bill A416 “would amend public health laws to allow for the removal of ‘cases, contacts and carriers of communicable diseases who are potentially dangerous to the public health’” should the governor declare a public-health emergency. This would allow for the detaining of anyone who “pose[s] an imminent and significant threat to the public health” until he or she is no longer contagious. Dapcevich adds that the bill is not likely to pass.

To determine whether the bill would establish COVID-19 “detention camps,” Dapcevich’s fact check rests largely on two details. First, that the bill is not specific to COVID-19, and it would not lead to detention camps, Snopes says. Dapcevich references four tweets in which, she suggests, people claim that it would do so. The problem: None of the tweeters she links to or reprints actually makes this claim. Nor is the summary, as Snopes presents it, a fair representation of any of their tweets. Instead of creating such a claim and pinning it on several conservative commenters, Snopes should have analyzed a verbatim claim that more accurately represents conservative outcry against the bill.

The first tweet to which Dapcevich links comes from former congressional candidate Liz Joy. “This is straight up detention camp stuff in NY!” she writes. Joy’s tweet is the only one of the four that uses the term “detention camp,” a phrase that features prominently in the Snopes article. Dapcevich claims that the isolation centers proposed in the legislation “are not designated as ‘detention camps,’” but whether they qualify as detention camps is a matter of definition – which neither Dapcevich nor Joy provides – and of opinion, not of fact, and therefore not in need of a fact-check.

The second tweet referenced comes from Laura Ingraham of Fox News, who urges, “Read the bill that will allow New York to detain problematic state residents during a ‘health emergency.’” The only part of this tweet resembling a claim is her use of the word “problematic,” which again, is a question of opinion and interpretation, not fact.

The third tweet comes from author David Samadi, a physician, who urges people to read the bill “up for consideration in New York State in regards to COVID-19.” Dapcevich points out that the bill is not specific to COVID-19 but doesn’t dispute that the measure would almost certainly be significant if passed before the pandemic’s end, though again, she concedes that passage is unlikely.

Beyond the links to all these tweets, Dapcevich focuses on an embedded tweet from conservative podcaster Allie Beth Stuckey, though Stuckey’s claim bears little resemblance to the claim Dapcevich is examining. “So disturbing,” Stuckey wrote. “NY bill allows for the *removal and detention* of anyone who ‘may be a danger to public health.’ Yes, that’s purposely undefined. Yes, it will be used, at least one day, to forcibly remove you or your children from your home for whatever reason the state sees fit.”

Stuckey’s claim does not use the phrase “detention camp,” and her use of the phrase “removal and detention” does appear in the proposed bill, which states that “the governor or his or her delegee … may order the removal and/or detention of such a person (who is considered a danger to public health).” Stuckey’s characterization of this legislation as “disturbing” is an opinion, as is her hypothesizing as to the intent of the language and its future implications.

Snopes has effectively made up a claim that is a combination of a number of claims –some of them misleading, others mere opinions – and then “fact-checked” this amalgamated claim (that no one is actually making) instead of fact-checking one of the actual claims.

On Jan. 4, Snopes used a similar tactic, running a fact-check in response to readers who wanted “verification of online rumors” that recent federal legislation allowed children to receive vaccines without their parents’ consent. Snopes rated the claim “Mostly False.”

Contributor Bethania Palma explained that anonymous readers had “shared screenshots” with Snopes of a post on a website called Conservative Brief. The post accurately reported the passage of a law in the District of Columbia allowing minors as young as 11 to be vaccinated without parental consent. The image associated with the post on Conservative Brief depicted Dr. Anthony Fauci, the head of the National Institute of Allergy and Infectious Diseases, which “led some readers to believe that a new nationwide law,” rather than a D.C. law, “allows children 11 and older to get vaccinated without their parents’ knowledge or consent.”

Palma affirmed that Washington, D.C., did pass a law allowing minors to be vaccinated without parental consent, which was the extent of the claim made by Conservative Brief in its report. Readers’ mistaken impression that such allowance was made at the federal level – nowhere stated or implied in the text of the Conservative Brief report – was deemed “mostly false.”

The screenshot and its underlined portion appear to suggest that it would be “misleading” to claim that the law allows children to be vaccinated without parental knowledge or consent. Palma’s own report, however, affirms that the D.C. law “allows children as young as 11” to “get vaccines against a range of illnesses” without their parents’ consent, and further affirms that the resulting “vaccination record would be sent to the child’s school, not to their parents, if the parents are using a religious exemption that allows their child to attend school without vaccines against communicable diseases.”

In other words, there are no factual errors in Conservative Brief’s report, no errors in its post on Facebook, and no errors in the screenshot. The only factual errors came from readers incorrectly inferring that the law was implemented at the federal level, which the text of the report in question never asserted.

It may have been misleading for Conservative Brief to use an image of Fauci, but Snopes’s decision to associate the site’s entirely factual report with a “Mostly False” fact check seems unfair and similarly misleading.

When fact-checkers present claims in need of analysis, they imply that someone has made that claim – namely, the person or persons cited in the article. By fact-checking a statement that no one has actually made instead of specific claims, Snopes and other outlets risk misleading readers.