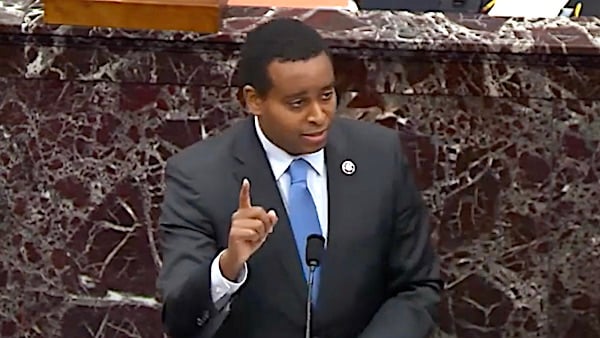 Some of House Speaker Nancy Pelosi's impeachment managers are relative newcomers to Congress.

One is Rep. Joe Neguse, D-Colo., a rising star among Democrats who boasts on his website of his role in the Congressional Progressive Caucus and the House Democratic Leadership.

But his reputation might have taken a hit on Tuesday, arguing for the impeachment of President Trump, he mischaracterized the opinion of constitutional scholar Jonathan Turley of George Washington University.

Neguse claimed that Turley's opinion about the validity of retroactive trials for people who already have left office was recent.

But it was actually more than two decades ago, 21 years to be precise.

"Neguse cited my Duke piece at length to support the basis for retroactive trials after saying that I supported such trials until the last few weeks," Turley wrote on his website.

"I felt Neguse did an excellent job in his argument but that statement is simply not true," Turley said.

He explained he does recognize "the value" of such trials, but "his characterization of my position ... was misleading."

"Indeed, if my views of 21 years ago are going to be cited as recent, I would at least appreciate the use of my thinner photos from the 1990s," he joked.

Turley noted that another legal analyst, Laurence Tribe, also "bizarrely" claimed that "not long ago" he, Turley, argued in favor of retroactive trials, based on the Duke Law Journal article from 21 years ago.

Turley explained his views have evolved.

"If I were to write the Duke piece today, I would still maintain that it shows how impeachment trials serve this dialogic role but that, of the three outlying cases, I agreed with the decision in Blount (and the view of roughly half of the Senate in Belknap) that such trials are extraconstitutional.

"It was historically allowed but I believe that it is not constitutionally sound. That view against retroactive impeachments is strengthened by what we have witnessed in the two Trump impeachments," he explained.

He said he has become more "textualist" in his views over the years.

"There is nothing strange about such evolution in views of constitutional interpretation. Indeed, as scholars, we are ideally always evolving in our knowledge and our views."

In 1999, he said, "the Senate majority … was correct in its view that impeachments historically extended to former officials, such as Warren Hastings."

In fact, impeachment was "used retroactively in Great Britain as a historical matter," he said.

"Yet, there are significant differences in the use of impeachment in both countries. Indeed, the colonial impeachments were strikingly different in many respects," wrote Turley.

He said his current opinion is:

If impeachment was simply a matter of removal, the argument for jurisdiction in the Belknap case would be easily resolved against hearing the matter. The Senate majority, however, was correct in its view that impeachments historically had extended to former officials, such as Warren Hastings. Impeachment, as demonstrated by Edmund Burke, serves a public value in addressing conduct at odds with core values in a society. At a time of lost confidence in the integrity of the government, the conduct of a former official can demand a political response. This response in the form of an impeachment may be more important than a legal response in the form of a prosecution. Regardless of the outcome, the Belknap trial addressed the underlying conduct and affirmed core principles at a time of diminishing faith in government. Absent such a trial, Belknap’s rush to resign would have succeeded in barring any corrective political action to counter the damage to the system caused by his conduct. Even if the only penalty is disqualification from future office, the open presentation of the evidence and witnesses represents the very element that was missing in colonial impeachments. Such a trial has a political value that runs vertically as a response to the public and horizontally as a deterrent to the executive branch.

He also said there is no question that an official could bar corrective political action with a resignation.