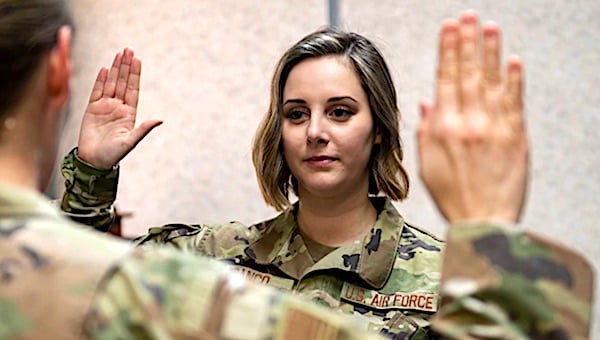 Air Force Staff Sgt. Jamie Franco recites the oath of enlistment during a change of service ceremony at Osan Air Base, South Korea, Feb. 1, 2021. Jamie and her husband, Frank, both made the jump from the Air Force to the Space Force. (U.S. Air Force photo by Staff Sgt. Betty Chevalier)

The state Senate adopted concurrent Resolution No. 4010, "which reaffirms that the North Dakota's 1975 ratification of the ERA 'lapsed' on March 22, 1979, which was the deadline included in the ERA resolution submitted by Congress to the states on March 22, 1972."

The proposed amendment didn't garner the required approval of 38 states by the March 1979 deadline.

However, many activists want Congress to modify the amendment and extend the deadline, contending there's enough support now for it.

The Department of Justice Office of Legal Counsel issued a legal opinion in 2020 stating that the ERA had expired and "cannot be resurrected by Congress, except by re-starting the entire constitutional amendment process."

The North Dakota Senate affirmed that the state "should not be counted by Congress, the Archivist of the United States ... any court of law" as a state "still having on record a live ratification" of the ERA.

The resolution now goes to the North Dakota House, which previously passed a similar resolution.

When the March 1979 ratification deadline arrived, only 35 of the required 38 states had ratified it, and five of those had rescinded.

The Right to Life organizations said: "Nevertheless, in recent years, various groups have claimed that ratification deadlines are unconstitutional, or that Congress can change them retroactively by simple majority votes. Based on such unprecedented claims, the states of Virginia, Illinois, and Nevada are pursuing a lawsuit (Virginia v. Ferriero) in federal court, claiming that the ERA has been ratified by 38 states and is part of the Constitution – and they are counting the 1975 North Dakota ratification. Many expect that the Biden administration will soon urge Congress to endorse this scheme."

Douglas Johnson, senior policy advisor for National Right to Life, said pro-abortion groups "now openly proclaim that they will use the ERA as a legal weapon against all laws limiting abortion, and to require government funding of abortion."

"The result could be the invalidation of hundreds of pro-life laws, state and federal. Fortunately, the ERA expired unratified in 1979—yet, liberal states now are urging a federal judge, and Congress, to say that the ERA achieved the required 38 states when Virginia endorsed the ERA in 2020," he said. "We applaud the North Dakota Senate for saying to the courts and to Congress, ‘Count us out!’ on this unconstitutional, pro-abortion scheme."

Johnson explained North Dakota's statement is not a "rescission," since the proposal already is dead.

"Rather, SCR No. 4010 is an affirmation that the North Dakota legislature’s 1975 consent was to a specific congressional proposal that included a deadline, and that consent lapsed when the 1979 deadline was reached without the required consensus by 37 other states."

"I would like to see a new beginning. I'd like it to start over," she said. "There’s too much controversy about latecomers -- Virginia, long after the deadline passed. Plus, a number of states have withdrawn their ratification. So, if you count a latecomer on the plus side, how can you disregard states that said, ‘We’ve changed our minds'?"