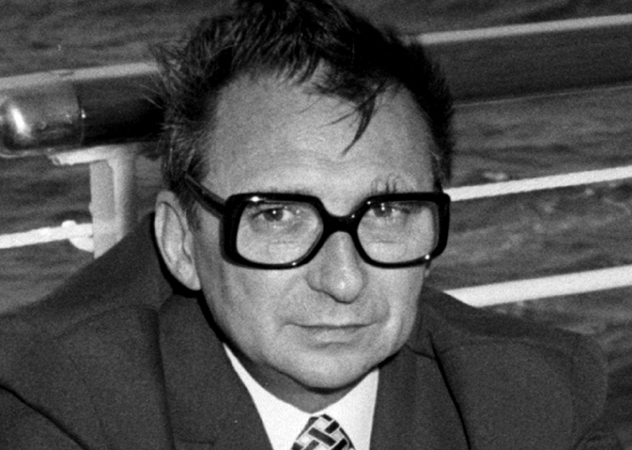 Lt. Gen. Ion Mihai Pacepa – the one-time communist spymaster who would later become the highest-ranking Soviet bloc defector during the Cold War, and a true American patriot praised by President Reagan and countless others – died Sunday morning. He was 92.

Pacepa, who had battled various health issues in recent years, had been in the hospital for a while and in intensive care the past couple of days before succumbing to COVID-19. He is survived by his wife, Mary Lou, and his daughter, Dana.

The story of Ion Mihai Pacepa is a rare one, since seldom does someone occupying such a high-ranking position in an “evil empire” experience both the requisite change of heart to leave, and the good fortune to actually make it out alive.

After two decades as head of Romanian espionage, Pacepa in 1972 became the communist nation’s director of foreign intelligence and also top adviser to the infamous dictator Nicolae Ceausescu. As such, Pacepa not only was an eyewitness to some of the most audacious and influential disinformation campaigns of the 20th century, he was in some cases a major participant.

Fortunately, despite the power and prestige he had, as well as the seductive delusions of communism and the luxurious lifestyle he enjoyed as a spymaster, replete with mountain villas, hunting lodges and chauffeurs – Pacepa’s internal moral compass ultimately prevailed and he knew he had to get out.

It was 1978 when Pacepa, in West Germany ostensibly to carry out business for Ceausescu, gathered up his courage, walked into the U.S. Embassy there and informed the officer on duty that he, a two-star general and top official in the Soviet intelligence world, wanted to defect to America. He was whisked out on a night flight.

Taking this precarious leap of faith from the pinnacle of power, Pacepa landed in the U.S., where he spent years revealing to America’s intelligence services precisely how their enemy counterparts conducted their most secret and nefarious activities.

For decades, Pacepa lived this way as a “proud American,” but due to long-term security threats and assassination plots against him, he continued to live under cover of an assumed identity for the rest of his life.

That's because, when Pacepa broke with communism, defected to the West and single-handedly demolished an entire enemy espionage service (the one he himself managed), Ceausescu had a nervous breakdown, put a $2 million bounty on Pacepa’s head and dispatched multiple assassination squads – including the notorious terrorist Ilich Ramírez Sánchez, a.k.a. “Carlos the Jackal” – to the U.S. to find his former top adviser and kill him.

It didn’t work. All such attempts against Pacepa's life – and there were several – proved unsuccessful, though twice the general’s CIA-created cover was blown, necessitating his adoption of a whole new identity and relocating again.

Ultimately, the curse Ceausescu placed upon Pacepa came back home to roost, as the dictator and his wife Elena were executed by a Romanian firing squad immediately following a trial in which the accusations against them came almost word-for-word out of Pacepa’s first book, “Red Horizons: The True Story of Nicolae & Elena Ceausescu’s Crimes, Lifestyle, and Corruption.”

“Red Horizons” became an international bestseller published in 27 countries, and President Ronald Reagan came to refer to it as “my bible for dealing with dictators.” (See photo below.)

On a personal note: In 2012, Pacepa wrote the definitive book on disinformation, titled “Disinformation: Former Spy Chief Reveals Secret Strategies for Undermining Freedom, Attacking Religion, and Promoting Terrorism,” coauthored with historian and law professor Ronald Rychlak, and with an Introduction by R. James Woolsey, former director of Central Intelligence. I was honored to be involved as the book’s editor, and also as a scriptwriter for the companion feature-length film documentary, “Disinformation: The Secret Strategy to Destroy the West.”

It was wonderful to know and to work with Mihai Pacepa – “Mike,” as his friends called him. Mike, Ron Rychlak and I have remained good friends ever since.

I can’t think of a better way to close this reflection on the life of Mike Pacepa than with the following recollection he shared with me:

"It was noon when the U.S. military plane bringing me to freedom landed at the U.S. presidential airport inside Andrews Air Force Base outside Washington, D.C."

"It was a glorious, sunny day outside, which only magnified the fireworks popping off inside of me. For many, many years, I had learned to hide my personal feelings. For that was the way of life in a Marxist society, where the government had its informants everywhere and where microphones covered you everyplace you went, from the office to the bedroom. But on that unforgettable day, I had an overwhelming desire to dance around in a jig all by myself. I was a free man! I was in America! The joy of finally becoming part of this magnanimous land of liberty, where nothing was impossible, was surpassed only by the joy of simply being alive.”

One final thought: During an interview I did with Mike for WND, I asked him, “Did you believe in God during the years you were working for the atheist Soviet bloc intelligence and disinformation apparatus? When did faith become an important part of your life?”

His response: “On that memorable day of July 28, 1978, when I became a free man, I fell to my knees and I prayed out loud for the first time in more than a quarter of a century. It took me a while. It was not easy to find the right words to express my great joy and thanks to the good Lord. In the end, all that I asked for was forgiveness for my past, freedom for my daughter and strength for my new life.

“It was my deep-down belief in God, inherited from my mother, that had kept my dream of freedom alive for all those 27 years I was a communist spy.”

God bless you, Mike. Rest in peace, my friend.

David Kupelian
David Kupelian is an award-winning journalist, long-time Managing Editor of WND.com, and the bestselling author of "The Marketing of Evil," "How Evil Works" and “The Snapping of the American Mind.”
Memo to Christians: Here's what's REALLY at stake in midterm elections
How tyrants and lunatics are enslaving Americans by redefining EVERYTHING
Google falsely warns readers: WND 'may harm your computer!'
The REAL reason transgender groomers are targeting America's children
Google's all-out attack on WND
See more...