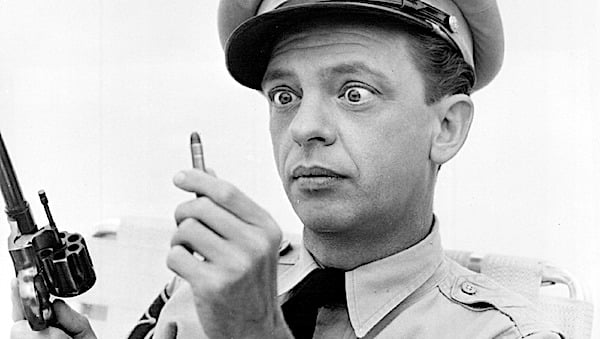 Last week, the Biden administration promised gun control groups that it will soon roll out a massive push for limits on firearm purchases and other measures. President Biden reiterated that promise on Sunday. And the television networks aren’t waiting to lay the groundwork for this effort.

CBS is in a full-court press for gun control on its evening entertainment television shows. The bad guys are always white supremacists who use machine guns — supposedly AR-15s — to commit mass public shootings. Criminals in Mexico supposedly get machine guns from the United States. A father’s desire to protect his family only leads to tragedy when his daughter gets into the gun safe and uses the weapon in a mass public shooting. And guns in the home pose a danger for children. Gun registration is necessary for solving crime.

NBC isn’t to be left out, showing a woman who tried but failed to use a gun to protect herself. Instead, her gun was taken from her and used to kill a police officer. The lesson is that owning a gun will only bring you grief.

And that’s just in the first six weeks of the year. Every show gives an inaccurate impression about firearms, thereby helping in this push for gun restrictions. It’s as though these shows were written by Michael Bloomberg’s gun control organizations. Indeed, the networks are working with these groups. A member of  Moms Demand Action recently wrote a Washington Post op-ed headlined: “Guns are white supremacy’s deadliest weapon. We must disarm hate.” So it isn’t too surprising that show after show portrays neo-Nazis using machine guns to commit mass public shootings. CBS’s “SWAT,” “FBI: Most Wanted,” “FBI,” and” Bull” all push this theme. They often refer explicitly to these guns as AR-15s. Others, such as “Magnum PI” and “NCIS LA,” constantly show criminals using machine guns.

In real life,  machine guns aren’t used in mass public shootings -- and in only two murders since the 1930s. AR-15s are not machine guns. They are semi-automatic rifles that fire the same bullets with the same power and rapidity as any small-caliber, semi-automatic hunting rifle.

Also, it’s rare for white supremacists to commit mass public shootings – and in 72% of these murderers the shooters have no obvious political views. By far the next largest group is Islamic extremists, at 10%. People identified as “right-wingers” only make up 3%, and another 3% are conservative or Republicans. The same numbers are liberal, Democrat, left-wing, or black militant. While 58% of mass public shooters are white (excluding Middle Easterners), that is less than their share of the population (64.4%).

“Magnum PI” has an episode where a 12-year-old steals his father’s gun from a bedside table and accidentally shoots his 10-year-old brother. The message is that parents should be afraid of having guns in the home. But, in 2019, there were 37 accidental gun deaths among children under 11 years of age in the entire country. Most of those deaths involve shots fired by adult males, typically in their mid- to late-20s, who also have criminal records and are very likely to be drug addicts or alcoholics. With 43.8 million children under 11, the probability of a young child getting ahold of a gun and accidentally shooting another child is incredibly small.

CBS’s “Coyote,” starring Michael Chiklis, contains multiple misleading claims in virtually every episode. Chiklis’s character claims that the United States is the source of Mexico’s machine guns, but only 17.6% of all criminal firearms collected by Mexican authorities can be traced back to America. Hollywood screenwriters may not realize it, but you can’t just walk into gun stores in the U.S. and buy machine guns.

CBS’s “FBI” portrays a Mexican family living in the United States. The wife and daughter are murdered in a mass public shooting committed by a white supremacist. The grieving husband/father relates a conversation with his wife about her concerns that the U.S., which is flooded with guns, is more violent than Mexico. In fact, Mexico’s murder rate is six times higher than in that of the United States. Incidentally, while about half of American households own guns, well under 1% of Mexican adults legally own a gun.

The lessons from these entertainment shows are clear. Don’t try to use a gun for protection, and it’s better to not even think of owning one. Also, the biggest danger in present-day America is white racists with machine guns. Gun control advocates know Americans won’t accept more gun control if given accurate information. It is bad enough that news programs provide only one side of this debate. But when Americans just want to be entertained, they still can’t escape lies about gun ownership.

Lott is the president of the Crime Prevention Research Center and the author most recently of “Gun Control Myths.” Until last month, Lott was the senior adviser for research and statistics at the U.S. Department of Justice’s Office of Legal Policy.