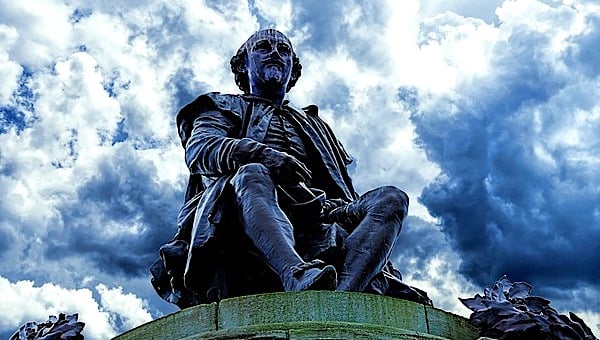 A statue of William Shakespeare (Image by Martin Ludlam from Pixabay)

For centuries, William Shakespeare's works have been used to teach English, humor, irony and tragedy.

It's strange, then, his lessons in "toxic masculinity" and "Marxism" have been missed until now.

"Woke" English teachers are reinterpreting his work or  just canceling it because of his "white supremacy, misogyny, racism and classism."

The coalition, #DisruptTexts, declares "this is about White supremacy and colonization." They demand that Shakespeare and other iconic figures in Western literature either be removed from schools altogether or face mandated criticism.

One members of the group is Elizabeth Nelson of St. Paul, Minnesota,  who says that when she teaches Shakespeare, the focus is "Marxist theory."

Their efforts are being promoted by The School Library Journal, a far-left publication that calls itself "the premier publication for librarians and information specialists who work with children and teens."

The publication claimed that more and more educators believe "it's time for Shakespeare to be set aside or deemphasized to make room for modern, diverse, and inclusive voices."

DailyMail.com reported Amanda MacGregor, a librarian in Minnesota, wondered why the Bard is included in classrooms anyway.

"Shakespeare's works are full of problematic, outdated ideas, with plenty of misogyny, racism, homophobia, classism, anti-Semitism and misogynoir," she said.

Claire Bruncke, an English teacher at Ilwaco High in Washington state, DailyMail.com reported, asked school officials if there was a "requirement for how much Shakespeare I needed to cover."

Told that it was the "standards" that were important, she dropped Shakespeare entirely, replacing him with "anthologies and novels."

Those who still use the author of "Romeo and Juliet" and "King Lear," such as Sarah Mulhern Gross of High Tech in Lindcroft, New Jersey, said they teach "toxic masculinity analysis."

And Peter Wood, president of the National Association of Scholars, said it's nothing more than "a new version of cancel culture."

"They have little regard for the great books," he said.