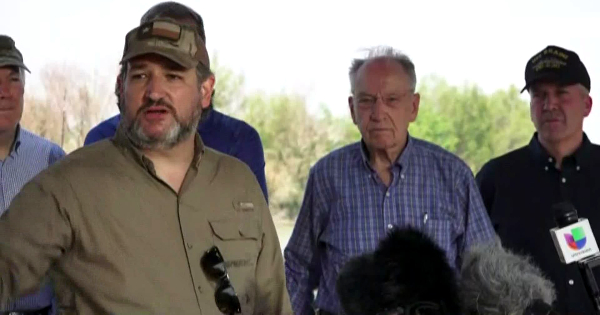 After a gun-boat tour Friday of the Rio Grande and visits to overwhelmed border facilities amid the migrant surge, a delegation of 19 Republican senators expressed outrage, accusing President Biden of painting a false picture of the situation while blocking media from direct access.

"It's time to let the press in to see what is happening and the tragedy that this administration has brought on to our nation," said Sen. John Barrasso, R-Wyo., at a news conference with the border river in the background.

Sen. Mike Braun of Indiana accused the Biden administration of commiting an "unforced error" amid a "caustic political environment" in which "if one side is doing it, and it happens to be going well, the other side wants to undo it."

"Here's what I've learned," he said. "We have an upside-down border policy in America."

He explained he means that "we have open borders on the southern border."

"And by the way, the people who are coming in, who are released immediately almost, are not tested, at all" for COVID-19.

Several senators mentioned the horror of coming across the dead body of a migrant child floating in the river.

Sen. Lindsey Graham, R-S.C., who has been in Congress since 1993, called it the most important trip he's ever taken as a lawmaker.

He said Brian Hastings, the chief Border Patrol agent, told the senators that he breifed Biden transition team members and warned them what would happen of if they reversed the previous administration's border policies, including Remain in Mexico and laws allowing unaccompanied minors to be sent home.

"Everything they said would happen happened," he said.

Graham said he's going to find out who Hastings talked to "and memorialize that conversation and hold them accountable."

"Because they knew, and when they say this is a Trump problem, they are lying," the South Carolina senator said. "This is a problem of their own making."

As WND reported, a delegation of House Republicans led by Minority Leader Kevin McCarthy visited the border two weeks ago and made a similar plea to Biden to act.

Sen. James Lankford posted video on Twitter of migrant children in what critics are describing as "Biden's cages":

Graham said Biden made the problem worse at his "nightmare" press conference Thursday by promising to expand the number of migrants the U.S. can take.

"He said when a child has a phone number on the wrist he's going to call the family member and unite that family," Graham said of Biden.

"This is uniting illegal immigration."

Sen. Ron Johnson, R-Wis., noted that the person Biden put in charge of handling the surge, Vice President Kamala Harris, compared ICE, the Immigration and Customs Enforcement agency, to the Ku Klux Klan when she was a senator.

"This is sad, this is tragic, this didn't have to happen," he said of the crisis. "There's a word for what is happening at our border: it's insanity."

'The madness has to stop'

Sen. Tom Cotton, R-Ark., noted that the immigrants were "not running away from the Border Patrol agents, they are running to them."

Agents, he said, have been turned into "social workers, baby sitters and cafeteria workers."

Cotton said Biden needs to tell potential migrants: "Do not leave your home, do not come to our country. If you do, you will be sent home."

"The madness has to stop," he said.

North Dakota Sen. John Hoeven noted the senators saw a dead body in the river on their way to the news conference.

"We just want the American people to understand what is going in here, because if they do, they will say this has to stop right now," he said.

The senators, he said, witnessed people streaming in illegally and being processed underneath a bridge in the middle of the night.

The senators weren't allowed to take photos, however, and neither is the media.

Media also are not allowed in a tent facility in Donna, Texas, where migrants are being housed. With COVID protocols, the capacity is 250, and without protocols it's 1,000, Hoeven said.

The immediate problem can be addressed by reinstating the Remain in Mexico policy and "safe third country approaches," the North Dakota senator said.

"Then let's figure out how we address immigration in an intelligent and a humane way," he said.

Hoeven emphasized it "starts with the American people understanding what is going on."

Sen. Steve Daines, R-Mont., said his state has been hit with a flood of meth from Mexico from the cartel. The illegal drug has a purity of 95%, meaning it is far more dangerous than the local varities, and the quantity means it is much less expensive

His northern state, he said, has cartel members in prison along with an influx of members of the notorious MS-13 gang.

Sen. Lankford, R-Okla., said Biden "doesn't want the media to be here because we do have open borders."

He said Border Patrol agents are being removed from one area to another, leaving gaps in the border, with 50% of agents now doing processing.

"That is the defintion of open borders," he said.

Lankford said the policy is "nonsensical" and the crisis wasn't happening three months ago.

Sen. John Kennedy, R-La., told media he's sorry they are not allowed to see what the senators saw.

Immigration authorities and agents, he said, "want to go back to the border practices and the border security that existed on the day that Biden was inaugurated."

He said that either President Biden believes in open borders or the people put in charge are not qualified.

He warned that if the situation not changed, it will get 10 times worse.

Sen. Ted Cruz posted video on Twitter of "human traffickers & cartel members tonight, yelling at us across the Rio Grande and preparing to cross:

We encountered human traffickers & cartel members tonight, yelling at us across the Rio Grande and preparing to cross. #BidenBorderCrisis pic.twitter.com/yXl3AyUIPd

See another Cruz video from the border:

Biden 'tore up the deal'

Opening the news conference to reporters, the first question was whether or not the senators regarded the surge in 2019 under President Trump a crisis.

Sen. Ted Cruz, R-Texas, said it indeed was a crisis then and Trump "tried very hard to solve it.

Trump had sought help from Congress, including additional funding to build the border wall, an end to the Flores Agreement (which a judge expanded, requiring children be held no longer than 20 days) and legislation so that DHS could treat unaccompanied alien children from Central America the same as those from Mexico.

But Democrats in Congress blocked the effort, he said.

What "turned it around," Cruz said was the Remain in Mexico policy to which Mexico agreed after Trump threatened to imposed tariffs.

The result was the lowest illegal immigration figures in 45 years.

But upon entering office in January, Biden "tore up" the deal with Mexico.

Now, 15,000 children are in custody and the number is rising.

In February, according to federal officials, there were 100,000 encounters with illegal immigrants, triple the number from the previous February.

'Why don't you ask the people in charge?'

A reporter emphasized that the United States is a "nation of immigrants," and Cruz agreed, noting his father came from Cuba with very little to his name.

"There's no nation on earth that is more generous and more welcoming than the United States of America," he said.

"But theres a right way to come," said Cruz. "The wrong way is to put children in the hands of vicious human traffickers."

Graham said to the reporter: "Why don't you ask the people in charge rather than making a political statement in your question?"

"Don't ask us, we're politicians, ask these people over here why they've lost control of the border," Graham said.

Graham said there were "a number of things that caused this crisis and President Trump's administration fixed the problem."

"We were controlling the border," he said, and Biden "ignored the advice of professionals."