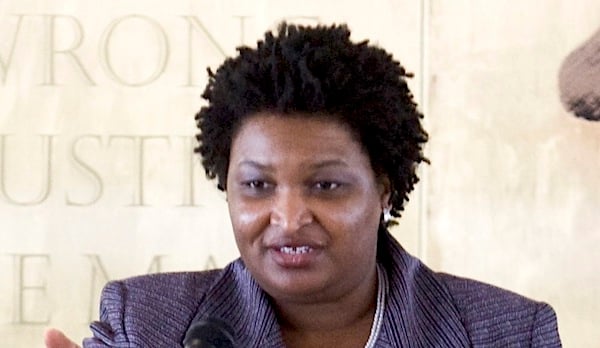 Stacey Abrams, who claimed she lost her 2018 bid for governor because of race-based "voter suppression," is pressuring businesses to speak out against voter integrity bills in the Georgia legislature.

"There were businesses that were silent in the election for whatever reason. But there should be no silence from the business community when anyone in power is trying to strip away the right to vote from the people,” she said on a call Tuesday with left-wing organizations that promote mail-in voting and weakening voting requirements.

"There should be a hue and cry."

Breitbart's John Nolte noted Georgia is one of the six states where Joe Biden won narrow victories after voting laws were substantially altered by officials rather than state legislatures, as required by the U.S. Constitution.

In December, Georgia Secretary of State Brad Raffensperger's office announced it was investigating an organization founded by Abrams, as well as several other groups, for allegedly trying to "aggressively" register "ineligible, out-of-state, or deceased voters" in the weeks leading up to the state's Jan. 5 Senate runoff elections.

That month, Abrams took aim at the non-profit voter-integrity group True the Vote in a CNN interview.

"Republicans do not know how to win without voter suppression as one of their tools," Abrams claimed. “That’s why we see True the Vote down here in Georgia challenging 364,000 voters nine days, eight days before the election. Because voter suppression is their modus operandi.”

In Georgia, Raffensperger, a Republican, was criticized by many members of his party for caving to Abrams before the November election.

Should businesses speak out against voter integrity bills in the Georgia legislature?
14% (17 Votes)
86% (104 Votes)

His consent decree removed the signature-matching requirement for mail-in ballots, meaning anyone could mail in a vote claiming to be someone else.

Raffensperger also approved the use of 300 absentee ballot drop boxes without the legislature’s consent. Nolte noted questions remain about the security of the drop boxes.

Now, Georgia’s state legislature wants to plug holes that facilitate vote fraud. The bills include a photo ID requirement to vote, tightening of the eligibility rules mail-in voting, reduction of early voting days and the removal from the process of corporate giants like Facebook.

"Because these changes are widely popular among Democrats and Republicans, white voters and black," writes Nolte, "Abrams is using emotional blackmail against corporate America in the hopes they can pressure the legislature and Republican governor back off."