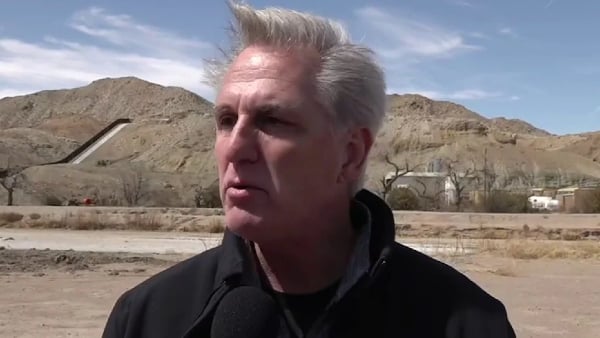 In an interview Monday at the southern border, House Minority Leader Kevin McCarthy called on President Biden to come see for himself that the surge of migrants since he took office is "more than a crisis."

The California Republican was alluding to the administration's refusal to describe the overwhelming of the immigration system as a "crisis" and instead call it a "challenge" that is being managed.

Speaking to Fox News in El Paso after touring nearby border facilities with 12 other Republicans, McCarthy said Biden's reversal of Trump policies is to blame.

The congressman said Biden "can continue to deny it, but the only way to solve it is to first admit what he has done."

"If he will not reverse action, it will take congressional action to do it," he vowed.

In February, Customs and Border Protection reported encounters with more than 100,000 migrants. And in recent weeks, the number of children at border facilities tripled to more than 3,250.

Many are being held longer than the law allows.

McCarthy said more than 10% of migrants tested for COVID-19 are positive.

"At a time when our president would keep our country closed and when maybe we have hope for a Fourth of July just to get together, maybe, with our families, how much spread of COVID is he creating every single day by his policies along this border?" McCarthy asked.

"It's wrong and it has to end and it needs to end now."

LISTEN: @GOPLeader speaks with @GriffJenkins as he tours the U.S.-Mexico border & says Biden "needs to come to the border, look what has happened on what he has created and change it" #AmericaReports pic.twitter.com/6SPUAoArPx