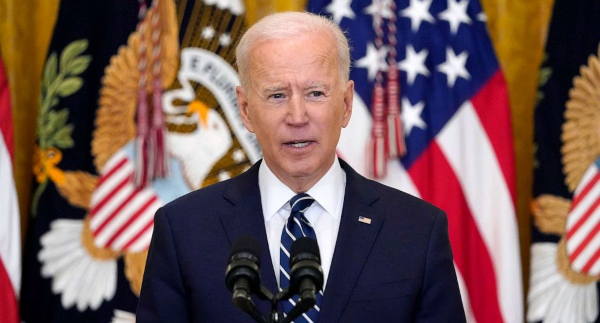 He made news saying his "expectation" is to run for reelection in 2024, when he will turn 82. He plans to announce a major "technological and physical" infrastructure bill on Friday that will "create significant numbers of really good paying jobs."

And he thinks the filibuster that is impeding his ambitious progressive agenda is a relic of the Jim Crow era.

He charged that Republican proposals across the nation to ensure election integrity, such as requiring voters to present an ID card, are "un-American."

He said that even some Republicans "find this despicable," calling the requirements "the most pernicious thing."

"This makes Jim Crow look like Jim Eagle," Biden said. "This is gigantic what they're trying to do, and it cannot be sustained."

He said he will do "everything in his power" to block such legislation but when asked for specifics, he said, "I'm not going to lay out a strategy in front of the whole world."

A reporter noted President Obama, at the funeral for Rep. John Lewis of Georgia, called the filibuster a relic of the Jim Crow era.

"Why not abolish it, if it's a relic of the Jim Crow era?" he was asked, alluding to his previously stated stance of modifying the filibuster rather than eliminating it.

"Successful electoral politics is the art of the possible," he said. "Let's figure out how we can get this done and move in the direction of significantly changing the abuse of even the filibuster rule first," he said.

In another exchange with a reporter, Biden said that regarding certain issues, if there is a "complete lockdown and chaos, as a consequence of the filibuster, then we're going to have to go beyond what I'm talking about."

He then launched into a train of thought that ran into a dead end.

"I'm going to say something outrageous. I have never been particularly poor at calculating how to get things done in the U.S. Senate," he said. "So, the best way to get something done if you, if you hold near and dear to you that you, uh, um, like to be able to, anyway. ... "

BIDEN: "I'm going to say something outrageous. I have never been particularly poor at calculating how to get things done in the U.S. Senate. So, the best way to get something done if you, if you hold near and dear to you that you, uh, umm, like to be able to, anyway..." pic.twitter.com/1h9r2SNqHb

Noting he had not set up a reelection campaign, as his predecessor had by this time in his term, Biden was asked if he will run for reelection in 2024.

"The answer is yes, I plan to run for reelection. That's my expectation."

A reporter followed up, telling Biden he had "just made news by saying you are going to run for reelection."

"I said that is my expectation," Biden interjected. "

"So is that a yes that you are running for reelection?" the reporter followed up.

He affirmed that if he does run, he "would fully expect" Vice President Kamala Harris to be on the ticket.

"Do you believe you will be running against former President Trump?"

"I have no idea whether there will be a Republican Party. Do you?"

Reporter Yamiche Alcindor of PBS said many immigrants are coming to the country because of the perception that Biden is a "moral and decent man."

But Biden insisted his "nice guy" approach isn't the reason, insisting the surge began under Trump, and seasonal patterns along with poor conditions in Central America are driving the surge.

"The truth of the matter is, nothing has changed," he said.

Another reporter, however, said she had just returned from the border, where she spoke with a 9-year-old boy who had walked from Honduras. The reporter spoke by phone with the mother, who said she sent her son because she believed Biden was not sending children home.

Biden replied that no previous administration sent children away, except for Trump's.

The president said he makes "no apologies" for ending Trump's immigration policies, including the Migrant Protection Protocols negotiated with three Central American nations from which asylum seekers come and the "Remain in Mexico" policy.

"First of all, all the policies that were underway were not helping at all, did not slow up the amount of immigration," Biden said. "Rolling back the policies of separating children from their mothers? Make no apology for that.

Reporters pressed Biden on when he will allow the media to view migrant facilities on the border.

"I will commit when my plan very shortly is underway to let you have access to not just them," Biden said. "I will commit to transparency."

Asked when that will be, he made no commitment.

Biden contended the "vast majority" migrants encountered by Border Patrol are being sent back.

"Some families are not going back because Mexico is refusing to take them back. Some, not all."

On foreign policy issues in particular, Biden referred to a binder of talking points, often reading directly from them.

He affirmed North Korea is his top foreign policy issue.

Asked what his "red line" is regarding the communist nation's threats, he mentioned a U.N. resolution and said the U.S. is consulting with allies.

"If they choose to escalate, we will respond accordingly," he said.

"But I'm also prepared for some form of diplomacy, but it has to be conditioned upon the end result of denuclearization."

Regarding China, he recalled a two-hour conversation with President Xi Jinping upon taking office.

"I made it clear that the U.S. is not looking for confrontation, although there will be steep competition," he said.

Biden said he told Xi that Beijing "must play by the international rules and honour fair competition."

The Chinese leader, he said, doesn't have a democratic – with a small 'd' – bone in his body, but he's a smart, smart guy."

Biden said his policy will be to "reestablish alliances," noting they are "not anti-Chinese."

He will speak with 27 heads of state in Europe, and earlier this month he met with Asia-Pacific allies Australia and Japan who have agreed to "hold China accountable."

That includes on human rights, he said.

"No American president has backed down" on pressing China regarding issues such as its persecution of the Uyghurs minority and Hong Kong anti-government activists, said Biden.

"The moment the president walks away from that, as the last one did, we no longer are America," he said.

Biden said China intends to become the most powerful and wealthiest nation in the world.

"I don't criticize their goal," he said, "but it won't happen on my watch."

In his opening remarks, Biden announced a new goal of 200 million COVID-19 shots in his first 100 days, which would match the current pace.

"I know it's ambitious, twice our original goal, but no other country in the world has come close," he said of the unprecedented vaccine program initiative by President Trump that brought a vaccine to market in just one year instead of the usual five to 10 years.

He said he wants a majority of K-8 schools open in his first 100 days. Already, he said, nearly half are open full-time

A majority of economic forecasters, Biden said, have increased their GDP projections to 6% growth. People seeking unemployment relief, he added, fell by nearly 100,000.

"I can say to the American people, help is here and hope is on the way."