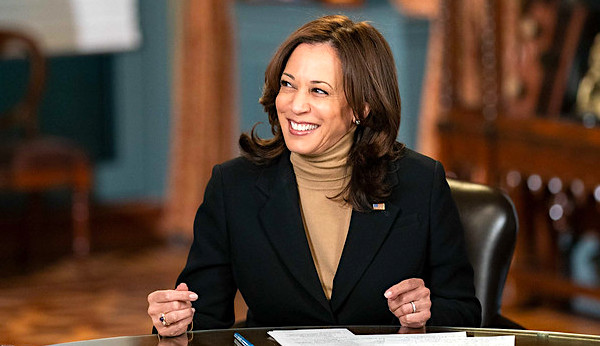 Vice President Kamala Harris sits for an interview with NBC's 'Today Show,' Feb. 17, 2021, from her ceremonial office in the EEOB in Washington, D.C. (Official White House photo by Lawrence Jackson)

Political pundits who have suspected that the "moderate," physically declining Joe Biden is merely a placeholder for the unelectable far-left Kamala Harris are taking note of a leaked email revealing a shift in White House communications strategy that elevates the vice president.

The email, a directive from a top White House communications team member, instructs all agencies to refer to the "Biden-Harris Administration" rather than the "Biden Administration," reports OUTspoken, a publication of the Log Cabin Republicans.

A federal employee disclosed to OUTspoken the move to elevate Harris.

The report noted the language also appears on the websites of all 15 executive departments.

"Press releases and other communications from the Departments of Agriculture, Commerce, Defense, Education, Energy, Health and Human Services, Homeland Security, Housing and Urban Development, Interior, Labor, State, Transportation, Treasury, and Veterans Affairs, and the Attorney General all exclusively refer to the Biden-Harris Administration, in lieu of only naming the president, which has been customary until now," OUTspoken said.

The report said the "move raises eyebrows among those who believe President Biden is mentally unfit to serve and is being slowly pushed out and replaced by Vice President Kamala Harris. "

"Since at least the beginning of the 2020 election cycle, and now into his first months as president, Biden has exhibited startling signs of mental decline, and possibly dementia, according to some medical experts," OUTspoken said.

"In public appearances Biden often appears dazed, confused, has difficulty speaking and walking, and is rarely permitted to answer unscripted questions from journalists. He is also often accompanied by his wife, Jill Biden, who appears to frequently provide him a level cognitive support."

The "Biden-Harris" stuff has been a thing from the beginning. pic.twitter.com/Bcx2kAXHVn

"This is a signal that he can't do the job alone," commented Ric Grenell, the former ambassador to Germany and acting director of national intelligence.